Darvinskiy Biosphere Reserve is situated on a peninsula in the north-west of the Rybinsky Reservoir on the Volga River. The biosphere reserve comprises bogs, marshes and inundated pine forests. The fauna and flora is typical for the southern taiga. Rare birds that nest in the area include the golden eagle (Aquila chrysaetos) and osprey (Pandion haliaetus). Elk (Alces alces), brown bear (Ursus arctos), and wild boar (Sus scrofa) find refuge in the biosphere reserve. Due to the operation of hydroelectric stations nearby, the water level changes, thus affecting near-shore habitats. 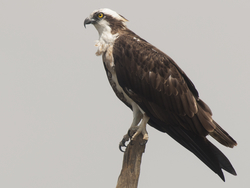 Territory of the reserve is a single natural system that combines typical ecosystems of the central parts of the low-lying flat watersheds (high-and intermediate bogs), ecosystems of well-drained coastal areas occupied by coniferous and mixed forests and low, periodically flooded terrace on which amphibious communities of the temporary submerged zone are developed. The specifics of the territory is that convergence of the central parts of the submerged watersheds with a coastal strip of a large water body has happened and a vast area of temporary submerging including coastal land and temporarily submerged areas was formed as a result of Mologa-Sheksna lowland submerging with the waters of the Rybinsk reservoir. This area became the site of the highest concentration of biodiversity.

Most of the current territory of the reserve before the formation of the Rybinsk reservoir was characterized by moderate man-made disturbance. The central parts of the low-lying inclined watershed occupied with high bogs were virtually undisturbed. Small villages were generally located in the valleys of the rivers and happened to be flooded by the waters the Rybinsk reservoir. Villages that have been located in the reserve’s territory during 1939 - 1941 were settled apart. Three population aggregates remained in the Reserve till nowadays; they are Borok village (central farmstead of the reserve), Zakharino village and Mikhalkovo fishing village.

Fourteen villages the population of which is now mostly not employed because agricultural enterprises were liquidated are situated in the buffer zone of the reserve (conservation zone on the side of the Vologda region). A limited number of jobs are available only in the sphere of education (Yagnitsa secondary school), social services (post offices, medical stations, shops) and also in administrative offices (rural municipal units). All the rest of the population is unemployed.