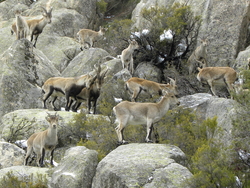 The Biosphere Reserve is located on medium altitude and high altitude mountains with valleys and rocky areas on granite and gneiss.

The “Pedriza de Manzanares” is to be noted, a spectacular geological landscape, dominated by strongly eroded granite formations of enormous capriciously shaped blocks known as “berruecos”, with a Mediterranean vegetation of aromatic plants such as thyme, lavender, Spanish lavender, rosemary and Cistus or Rockroses.

Among the tree formations are Oak and Ash groves, juniper and pine groves and, at higher altitudes, Cytisusoro mediterraneus scrubland.

All this reflects a continental Mediterranean climate, with a mean annual rainfall between 450 mm in the lower areas and 2,000 at higher altitudes.

Among the fauna, Iberian endemic species are to befound such as the Marbled Newt and the Iberian Frog. The Santillana Dam, which has been declared an Internationally Important Wetland is a wintering place for aquatic birds, such as winter populations of Black-headed Gullsand summer Stork colonies. 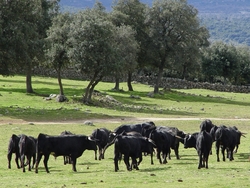 Traditional open-range livestock-raising continues to be the main land use, together with leisure and tourist activities derived from the proximity of the Biosphere Reserve to the city of Madrid.