This biosphere reserve is situated in the Tuamotu Archipelago some 360 km north-east of Tahiti. It is made up of seven low-lying coral islands and atolls: Aratika, Fakarava, Kauehi, Niau, Raraka, Taiaro and Toau, which are very different from each other. They vary greatly in size, shape, population, the activities carried out there, and whether they are open or closed to the ocean. This diversity makes the Commune of Fakarava Biosphere Reserve unique in its composition and characteristics. Those that are closed to the ocean include Taiaro which has a hypersaline lagoon, and Niau which has a brackish lagoon. Those that are open to the ocean include Fakarava, which has the largest pass in French Polynesia, at 1,600 metres wide. 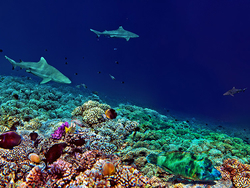 The Reserve offers a great diversity of landscapes, including coral formations, Phanerogam seagrass beds, ‘Kopara ’ ponds (formed by living cyanobacteria, algae, and bacteria, as well as organic matter resulting from their decomposition), primary forests of ‘Puatea’ (Pisonia grandis), coconut groves and other vegetation typical of the atolls of French Polynesia.

In addition to the species inhabiting the coral reefs, the Reserve is home to remarkable flora and fauna including rare, protected and endemic species.

The Taiaro atoll is a ring-shaped island built up on an ancient volcano that has sunk into the ocean due to the drift of the Pacific Ocean floor. Taiaro is only visible because of the rim of coral that forms a barrier reef 5 km in diameter around the original volcano. Unlike the other 420 atolls listed throughout the world, the inner lagoon is completely closed and therefore has exceptional characteristics, as yet little studied. 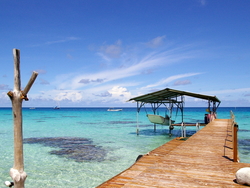 The 1,575 inhabitants that live in the reserve are unequally distributed. More than half of the total population is concentrated in the villages of Fakarava, which is the most developed atoll.