The Commander Islands Nature and Biosphere reserve is situated on the border of the north- western part of the Pacific Ocean and the Bering Sea to the east of the Kamchatka Peninsula on the Commander Islands, covered by mountain tundra, motley-grass meadows, where there are extensive wetlands, with a long coastline and Russia's largest protected marine zone.

The flora and fauna of the Commander Islands, the most western point of the Commander-Aleutian island arc stretching for more than 2000 km, are remarkable because of the unusual combination of species of Asian and American origin. Its coastal ecosystems are unique because of their marine mammals and birds diversity. 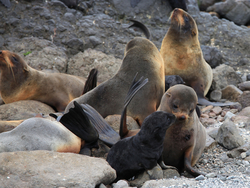 Flora and fauna of the Commander Islands is remarkable because of the unusual combination of inhabiting species of the Asian and American origin. Coastal ecosystems are unique because of the diversity of marine mammals.
There is no other place with such a great accumulation of marine birds and mammals on such a small area anywhere in Russia. 432 species and subspecies of vascular plants, more than 150 species of alga, 37 species of mammals, more than 215 species of birds, 216 species of fish are registered within the territory of the islands and in the coastal waters. More than 50 species, subspecies and forms of plants and animals, some of them being endemics of the islands are included in the Red books of IUCN and Russia. Ecosystems of the Commander Islands territory and shelf water area are of Asian and global conservation significance due to their good condition.

The Commander Islands Nature Biosphere Reserve is located in the Аleutian municipal district, which belongs, as the whole Kamchatka region, to the Far North districts. The reserve is located within the border zone of the Russian Federation so there are some special access regulations here.

The Aleutian district is highly-subsidized, but it faces more socio-economic issues than other Kamchatka region districts. The only settlement on the territory of the district is the Aleut village Nikolskoye. In the area there are no industrial enterprises. The main activity of the population is difficult to determine - the majority of the working population have jobs in service sector or are engaged in traditional activities (fishing, mushroom picking). There is a local fishing enterprise LLC "Aleutian fish factory" where several dozen villagers and guest workers from other russian territories work during fishing season. Traditional fishing, sealing, hunting, seaweed harvesting are still practiced in several tribal communities.

For some residents of the island dried mushrooms sale or hosting tourists during the short tourist season (July-September) is an additional revenu source.