The Clayoquot Sound Biosphere Reserve is situated in Vancouver Island on the west coast of British Columbia. A diverse range of ecosystems exist within the biosphere reserve boundaries, including temperate coastal rainforest, ocean and rocky coastal shores.

Nine of the large forested valleys remain untouched by logging or other industrial development. The area’s temperate rainforest, lakes, rivers and alpine peaks provide habitats for a vast array of species, a significant number of which are endangered or rare. Given that development is increasingly resulting in the fragmentation of forest and alpine ecosystems and loss of biodiversity in coastal rainforests, this biosphere reserve provides a welcome refuge and centre for the natural dispersion and re-establishment of species. 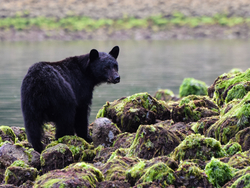 The second common habitat covering 12% of the Clayoquot Sound above 900 m is temperate rainforest (Mountain Hemlock). Dominant trees include the Mountain Hemlock, Western Yellow Cedar and Amabilis Fir. Fewer species are found at such a high altitude, but include some those of those found at lower altitudes. 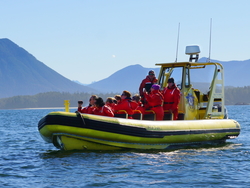 The permanent population amounts to about 5,000 people. At least one-third are Nuu-chah-nulth First Nations (of Aboriginal ancestry), whose traditional territories encompass the entire biosphere reserve.

Since 2000, the local economy has moved away from heavy dependency on industrial forestry and fisheries towards a more ecologically sensitive approach informed by Nuu-chah-nulth cultural principles, and small-scale alternatives built around a conservation economy. Aquaculture is also well established. Tourism and related services have grown rapidly along the coast, both in and between two towns accessible from the only road into the biosphere reserve. Seasonal visitors amount to about 1 million annually.