Chernyje Zemli Biosphere Reserve or ‘Black Land’ is situated in the Precaspian lowland and includes Manych Gudilo Lake which is also designated as Ramsar wetland. The lake is an important breeding site for a number of colonial shorebirds, such as Pelecanus crispus, Anser erythropus, Branta ruficollis and Oxyura leucocephala, all listed as globally threatened in the IUCN Red Data Book. 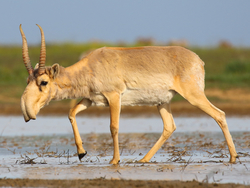 Most of the lakeshores are used as pastures or contain some fishponds. Within the grassland area, the conservation of the Saiga antelope (Saiga tatarica) is of special importance since its habitats have been largely destroyed with development activities in the surrounding semi-deserts and deserts.

The Republic of Kalmykia in the territory of which the reserve « Black Lands » is located, takes a special place on the map of Europe. Kalmyks are people, isolated in racial (mongolians), linguistic  (the Altay family, the Mongolian branch) religious (Buddhism) and agricultural (extensive cattle-breeding) senses.

The first measures on creation of the protected natural territories were accepted in Kalmykia more than 360 years ago. During the meeting of Kalmyk governors which was held in 1640 the law on allocation special « zones of rest » for saigas was accepted within the limits of which there hunting and cattle-grazing were forbidden. It was probably one of the first legal acts for protection of habitats of wild animals accepted on the territory of present Russia.

The territory, occupied by the biosphere reserve was situated in the region of the basic nomadic states of Sarmatians, polovtsians and others, through the land there passed one of branches of the Great silk way from China to Europe.