The Champlain-Adirondack Biosphere Reserve straddles the border of north-central New York and northwestern Vermont. Lake Champlain, the sixth largest lake in the United States, and the Adirondack and Green Mountains are the central features of the biosphere reserve. 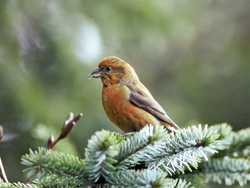 The Champlain-Adirondak Biosphere Reserve includes extensive temperate coniferous and deciduous forests as well as large numbers of lakes, bogs, and freshwater wetlands. It comprises the largest protected area in the Eastern US.  The single most important ecosystem service is related to watershed values.  Lake Champlain is the sixth largest lake in the US with its headwaters in the Green Mountains and Adirondack Mountains.

The biosphere reserve and its outlying areas are inhabited by over 400,000 people and are within a day’s drive of 60 million people living in the U.S. and Canada. Forestry and tourism are the economic base in the Adirondack region on the New York side of Lake Champlain. The more diverse economy on the Vermont side of the lake is based on forestry, farming, tourism, light manufacturing, and production of specialty agricultural products.

Since the Biosphere Reserve designation in 1989 and construction of interstate highways into the region, there has been a significant increase in the development of second homes, which fragment previously intact forest lands and induce changes in the composition and function of local ecosystems. As a consequence, both Vermont and New York have instituted and/or updated their land use and development plans, and have undertaken thorough reviews, enforcement and mitigation efforts in the region.