The Central Balkan Biosphere Reserve is located in the central part of Bulgaria spreading along the Balkan Mountain Range. This is the chief range of the Balkan Peninsula and Bulgaria and an extension of the Alpine-Carpathian folds. Four of the important Bulgarian rivers start in the Biosphere Reserve – Tundzha, Vit, Osam and Stryama.

The list of the higher plants which are also relicts includes 101 species. Of these, 48 are Tertiary relicts and the rest 53 species are glacial relicts. Thus the park ranks among the most important shelters (refuges) of arcticalpine elements in the high mountains in southern Europe.

The populations of 8 species of mammals, among which the Snow vole, the Souslik, the Lesser mole-rat, the edible dormouse, Bechstein’s bat and the Balkan chamois and bird species like Semicollared flycatcher and White-backed woodpecker are of global conservation significance. It is also a key territory for the restoration of large European vultures – griffon vulture, cinereous vulture and bearded vulture, and of the saker falcon. 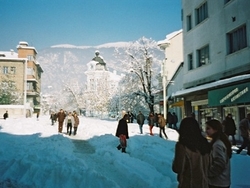 The core and buffer zones of the Central Balkan Biosphere Reserve are tourist attractions. The natural and cultural heritage, favourable location and good transport connections with the capital and other large cities are a solid basis for the sustainable development of the area. Walking tourism is encouraged in the buffer zone – over 580 km of tourist trails have been marked and are being maintained. Specialized trails have been developed for horse riding, cycling, bird-watching (plant- and animal-watching); special sites have been designated for extreme sports.

Many of the settlements in the area have been renowned crafts centers in the 19th and the beginning of the 20th century, and even today. Traditions have been preserved and continue to be developed by the successors of the old masters. The region of Troyan is famous for its pottery while Kalofer is known for the crafty lace. The towns and villages of the municipalities of Karlovo, Troyan, Sevlievo, Pavel Banya and Anton still offer the chance to observe the work of masters of traditional crafts such as wood-carving, icon-painting, leather-processing, weaving, making of weapons (both knives and rifles), pottery, copper-smithing.

The villages of the region have preserved traditional home productions of cheese, milk, rakia (Bulgarian brandy), wine, jams and other conserved food. Traditional agricultural practices in a large part of the region have not been modernized yet and the use of chemical substances or fertilizers is still quite limited. Many private farms are practicing organic and environmentally-friendly agriculture as it was once done. Even today, people in Kalofer, Troyan and other settlements are using the services of water-mills, fulling-mills and other old installations powered by water. Furthermore, the Karlovo and Kazanlak Valleys are traditionally the home of rose- and lavendergrowing. Several rose-processing houses are working in the southern part of the region and they have a big potential as tourist attractions. In addition the Rose Festival in Kazanlak attracts many toursists from all around the world each year.