The Castro Verde Biosphere Reserve is located in southern Portugal, in the hinterland of the Baixo Alentejo region, in the long and extense plains of the Beja district, in the heart of the Campo Branco. The extensive and plain surface of Castro Verde is dominated by open and continuous fields where cereal fields, fallows, natural grasslands (meadows) and fields with leguminous plants prevail. With a little sloping relief, which is around 200 meters above sea level, this agricultural matrix is only interrupted ccasionally by old olive groves and recent vineyards, sporadic tree (alone or in small groups), patches of shrubby and/or arborous natural vegetation and freshwater wetlands. Of the faunal species, a structured and diverse bird community of around two hundred species stands out.

The area has a population of 7,276 inhabitants (2011). The mining complex of Neves-Corvo, one of the major massive sulphide (pyrite) mineral deposits of the Iberian Pyrite Belt, operating since 1988, stands out as a major employer, involving a community of about 2,200 workers between the surface and the extraction wells. 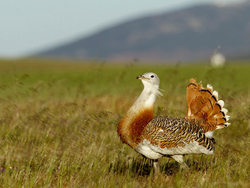 The Castro Verde Biosphere Reserve holds the most important cereal steppe area of Portugal which, in turn, is one of the most representative of the Iberian Peninsula and all of Europe. Cereal steppe or pseudo-steppe is one of the most threatened rural landscapes of the Mediterranean region. the area has a predominantly flat territory of sub-humid to dry ombroclimate and is in the most part in the termomediterranean level, and in some places reaches the mesomediterranean level.

The list of plant species includes trees and shrubs of plain, leathery and persistent leaves, like the Holm Oak and the Cork Oak (confined to sparse “montado” areas, especially of Holm Oak), the Nerium oleander (mainly present near the few steep valleys where humidity is still present), various schists and aromatic plants like Lavander (Lavandula sp.), Thyme (Thynus sp.) and Rosemary (Lavandula stoechas). The area has a high degree of endemisms in its flora, with 11 Iberian and Mediterranean endemisms. There is also the presence of two rare Lusitanian endemisms, Linaria ricardoi and Armeria neglecta, unique species in the world, which occur only in the region where the Biosphere Reserve is inserted (Alentejo).

Of the faunal species, a structured and diverse bird community of around two hundred species stands out. These include steppe birds such as Great Bustard (Otis tarda), Black-bellied sandgrouse (Pterocles orientalis) and Montagu’s Harrier (Circus pygargus). Fauna registers as well 8 Iberian endemisms. Of these, there is the emblematic Iberian Imperial Eagle (Aquila adalberti), one of the most endangered birds of prey in Europe and one of the rarest in the world. the low degree of humanization and the presence of Wild Rabbit (Oryctolagus cuniculus) make the territory of the biosphere reserve a place which is capable of hosting, even occasionally, the Iberian lynx (Lynx pardinus). 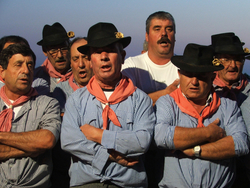 With an estimated population of 7,276 inhabitants (National Census of 2011) and an area of 569.4 km2, the biosphere reserve has a low population density (12.8 inhabitants/km2). Much of the population is in the town of Castro Verde (4,199 inhabitants), and the rest is distributed in a score of small and medium-sized villages (2,755 inhabitants) and some isolated houses, regionally designated as “montes alentejanos” (totaling 322 people).

Despite of the fact that the employment associated with the agricultural activity has declined in recent decades, extensive farming dryland cereals continued to be made, to which livestock is associated as a way to maximize sources of income.

The mining complex of Neves-Corvo stands out as a major employer in the region. It is one of the most important mining centers in Europe and one of the most important extractive industries of Portugal. The employer role of this industry in all the activities and services connected to it, as well as trade, construction and public works, have been instrumental in the reorganization and revitalization of the local economy.