Situated in the Eastern Carpathians, the Carpathian Biosphere Reserve comprises foothill oak-groves, mountain beech, mixed and spruce forests, pine-alder alpine elfin woodland, subalpine and alpine meadows, upland rocky-lichen landscapes. The largest massif of virgin beech forests in Europe (Uholsko-Shyrokoluzhanskyi massif) is protected in the biosphere reserve, as well as the Valley of Narcissi. Since June 28, 2007 it has become a part of the serial UNESCO World Natural Heritage site within the Ukrainian-Slovak nomination “Primeval Beech Forests of the Carpathians”. 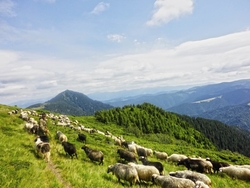 The Carpathian Biosphere Reserve plays a significant role in effective biodiversity conservation in the region. Its know-how and capacity allows it to fulfil this function fully. The Carpathian Biosphere Reserve covers all the natural-climatic zones of the southern macro slope of the Ukrainian Carpathians – from the Transcarpathian lowland up to the alpine belt with the elevation of 180- a.s.l. and fully represents the region’s landscape and biological diversity. Slightly disturbed and practically undisturbed pre-montane oak forests, mountain beech, mixed and pure spruce forests, subalpine meadows with pine-alder crooked woodland and rocky-lichen landscapes are found here. Rather numerous viable populations of large carnivores such as wolf, lynx and bear are well preserved here. 3.022 plant species, 1.353 of which – higher vascular plants, 315 vertebrate animal species, 66 of which are mammals, 195 bird species, 9 reptile species, 14 amphibian species, 29 fishes, 1 cyclostomatous species and about 15.000 invertebrates are protected within the Reserve. The most well-preserved Carpathian ecosystems, which serve a good shelter for a number of rare and endangered plant and animal species, are represented here. 197 plant species (with fungi) and 248 animal species listed to the Red Book of Ukraine, the European red Lists, and the International Red Book and to other conservation lists valid in Ukraine are found at the reserve.

Local people are the main agricultural land users and the majority of inhabitants are engaged in small-scale agricultural activities for self-supply. Almost all of them live outside the CBR, but a major part of their land use takes place inside the CBR, especially cattle and sheep grazing on polonynas. Each family usually owns a hay meadow in the mountains and a great part of them also keeps sheep on the alpine meadows where they are collectively managed by a shepherd over the summer. The traditional making and using of sheep products still plays an important role in many villages. Hence utilisation rights of and guaranteed access to grazing areas is crucial to most inhabitants. People depend very much on the availability of wood for heating and as construction material, which they mainly buy from state but also some private forestry enterprises. Unemployment rates are high. Most locally employed people work in the forestry sector. Additional local income is generated from small-scale tourism activities, fishing, the sale of non-timber forest products and illegal logging. The local population carries a high potential for the development of the CBR and the region, since a substantial part of their livelihood still depends on the land. The influence of local people is rather low since they are rather marginalised in decision-making, partly by the lack of direct decisive power.