This biosphere reserve is located in the extreme southeast of the Iberian Peninsula in the most arid part of Europe. It covers 49,512 hectares, of which 12,013 hectares are in the marine zone to a depth of 60 meters. Its volcanic rocks characterize the landscape and Mediterranean plant communities such as cornical (Periploca laevigata ) tomillares (Labiatae) and halophytic matorral adapted to drought which have a high floristic diversity and are considered a priority for conservation at the European and Mediterranean levels. 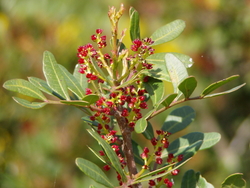 The Cabo de Gata Sierra is one of the main European volcanic mountain massifs.

It stretches to the coast with cliffs over 100 m high, edged with salt flats and chains of fixed sand dunes. The coastal shelf is well conserved with vast underwater meadows of Posidonia and benthic communities associated with the scantly illuminated rocky seabed.

The climate is conditioned by the proximity of the Sahara Desert and the influence during most of the year of the Azores anticyclone. The result is high temperatures and scant and irregular rainfall. The Biosphere Reserve hosts an abundance of semi arid plant formations with fan palms (the only autochthonous continental European palm tree),Pistacia lentiscus, Olea europaea var sylvestris and the Indian Jujub (Zizyphus jujube).

Together with numerous endemic species specific to the zone are many other species characteristic of Saharan flora.

In the dunes and sand flats vegetation adapted to saline soils has developed, including European Beach-grass, Salicornia and Arthrocnemetea.

Regarding the fauna, the Biosphere Reserve is home to grassland birds such as the Stone-curlew, the Tibetan Sand-grouse and the Black-bellied Sandgrouseand a diversity of aquatic birds present in the sandflats, such as the Black-winged Stilt, the Pied Avecet, the Flamingo and the rare Audouin's Seagull.

The inhabitants of these lands have been adapting to the difficulties of the environment, creating a traditional system for the use of natural resources based on fishing, livestock, agriculture and the collection of vegetable materials, such as esparto grass.

Mining, salt pans and traps are other activities that have been present for centuries and that, in the last decades, are making the territory more dynamic with the modernization and revaluation of its traditional production, complemented with a quality tourist offer.