Blekinge Archipelago, includes most of the coastal areas and archipelagos of Blekinge in the southeast of Sweden. With over 200,000 ha, the biosphere reserve comprises landscapes of granite coastline with the accompanying archipelago containing a variety of islands and islets. The area is marked by a rich natural and cultural heritage, as well as the strong commitment of local people to maintain the social and economic dynamics of the region through innovative thinking and entrepreneurship, alongside the development of energy efficient and environmentally friendly technologies. Joint research is being carried out by municipalities and universities on the sustainable use of coastal resources.

The many shallow and highly desalinated bays, lagoons, and estuaries along the coast are important spawning and growth areas for several species of fish while also being internationally significant grounds for stopping and overwintering for several seabird species. The great significance of the area for fish and birds has lead to two wetlands being singled out as of international importance (Ramsar wetlands): Mörrum River and Pukavik Bay, and Blekinge archipelago (three separate areas).

Some of the threatened oak-living species found in the area include the stag beetle (Lucanus cervus), the hermit beetle (Osmoderma eremita), warted oak polypore (Inonotus dryadeus), lacquered bracket (Ganoderma resinaceum) and the lichen (Lecanographa illecebrosa). The unique wealth of species in the Mörrum River is of equal importance for the preservation of biological diversity. The genetically unique strain of salmon (Salmo salar) is of crucial importance for the presence of salmon in the whole southern Baltic Sea and therefore also of high economic value. The shallow and partly fresh, brackish coves constitute valuable spawning and growth areas for fish, such as Northern pike Esoxlucius, European perch (Perca fluviatilis), and the Atlantic herring (Clupea harengus), which make the coves of significant ecologic and economic value. Simultaneously, they are of great importance for primarily several species of stopping and overwintering sea fowl. In the shallow coves lives also the algae Baltic stonewort (Chara horrida), endemic to the Baltic Sea. 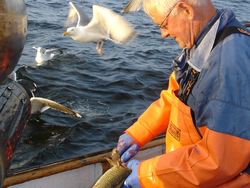 Humans have been part of and shaped the landscape since the end of the last ice age. Blekinge Archipelago is today a unique environment and very attractive for residents, tourist activities and for outdoor recreation.

There are important natural and cultural heritage values as well as strong local commitment to keeping the countryside alive all year around. There are also several actors already working for a sustainable development within the area.

These things considered suggest that the area is well suited to becoming a model and demonstration area for how economic and social development that is socio-culturally and ecologically sustainable can be stimulated and developed.

Blekinge Archipelago is a pronounced cultural landscape and humans have long made their mark on both land and water.

Traditional knowledge about the use of natural resources within small-scale coastal fishing and pasture-raised farming is still alive. The knowledge and the operations are highly important to safe