The Berlengas Biosphere Reserve includes a group of small islands and rocks, and the city of Peniche on the mainland.

The geology and geomorphology of the archipelago do not favour the formation of aquifers or perennial watercourses and the vegetation is mainly herbaceous. Most of the rocky substrate is in the form of steep cliffs sparsely covered with vegetation, sheltering important seabird nesting colonies.

The archipelago is situated 5.7 miles off the mainland, in a region characterised by two important geomorphological structures Cabo Carvoeiro and the Nazare Canyon.

These two formations have a significant influence on the physical environment and ecological features of the region, since they interact with the circulation associated with coastal upwelling to intensify primary production in the ecosystem. 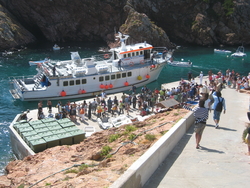 There is no population living permanently on the Berlengas archipelago. Residence is temporary and confined to Berlenga Island where there is a small urban and services area that hosts temporary visitors and tourists.

The city of Peniche has 16000 inhabitants. Most of the economic development of the Peniche is based on tourism, fishing and associated activities.

The various zones of the proposed biosphere reserve are contiguous. They consist of different units.

A range of goals and management guidelines have been established for these areas. The Berlengas archipelago and adjacent sea is governed by the Plano de Ordenamento da Reserva Natural das Berlengas. The body created to manage the whole Biosphere Reserve is the Permanent Working Group of the Berlengas Biosphere Reserve.