Bashkirskiyi Ural Biosphere Reserve is located in the western slopes on southern Ural and has a variety of landscapes from mountain river gorges, to mountains steppes, meadows, floodplains and reservoirs.  It is also home to significant archaeology and cultural tradition and hosts an increasing tourism industry.

Karst processes are widespread throughout the biosphere reserve. There are 166 known caves; some of them are internationally unique: "Shulgan-Tash" (Kapova), Novomuradymovskaya cave and Sumgan cave, the greatest downwarping cave in Europe. Besides the underground forms, surface karst forms are also common such as craters, ponors, bridges, canyons and cave-in lakes.

The high biodiversity is due to a weak human impact, a variety of landforms, a complex history of the vegetation formation during the pleistocene and holocene and a junction of two major forest biomes from Europe and Siberia. There are more than 1,650 plant species, of which 34 are endemic, and over 2,000 animal species.  The biosphere reserve includes Bielsko- Nugush interfluve and Uryuk, two important ornithological territories of European importance.

The biosphere reserve plays an especially important role in preservation of rare animals, plants and ecosystems of two forest biomes – European nemoral broad-leaved forests and hemiboreal light coniferous forests of Siberian type, which are situated at the boundary of their areas. 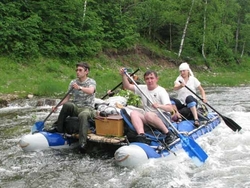 There are unique archaeological finds of universal importance and cultural and historical traditions of the Bashkir people in the territory of the biosphere reserve. Their most striking manifestation is the cosmogonical mythology, preserved in legends, mythological cycle of epics and archaic rituals. The core of this complex is the cult of the cave "Shulgan-Tash", which has been preserved since the Stone Age.

The total resident population is 14,957 with main activities being agriculture, forestry and small scale farming, increasingly tourism (180, 000 visitors from May to September) and traditional bee keeping. Nowadays Bashkir honey, produced by the Burzyansky wild-hive bee, is considered to be the best in the world according to taste and a set of microelements.