This biosphere reserve covers 100 km of the north-east shore of Lake Baikal and extends 45-80 km inland to the western slope of the Barguzinskiy Mountain range. Barguzinskyi Biosphere Reserve overlaps with the Lake Baikal World Heritage site. Situated in south-east Siberia, the 3.15 million hectares Lake Baikal is the oldest (25 million years) and deepest (1,637 meters) of the world's lakes. 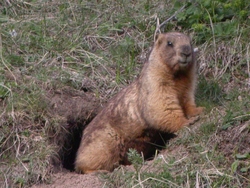 Its age and isolation have produced one of the world's richest and most unusual freshwater fauna that is of exceptional value to evolutionary science. With its outstanding variety of endemic animals and plants Lake Baikal is one of the most biologically diverse lakes on earth.

A small community is situated in the core area of the Biosphere Reserve. This is where the main buildings of the estate and the administration of the Reserve (120 people) used to be until 1998. Nowadays the community has up to 15 permanent inhabitants (staff of the Reserve and the meteorological station) and up to 30- the summer months. There is one cordon in the buffer zone periodically visited by 1-3 staff members. The transition zone is formed by the territory of Severo-Baikalskiy district including the town Severobaikalsk, urban community Nizhneangarsk, rural communities and villages. The main occupations of the local population are hunting, fishing, cattle raising, private farming enterprises, railroad (BAM - Baikal-Amur Mainline) services and maintenance, mining and employment in the touristic branch.

Tourists mainly visit the buffer zone for amateur fishing in the estuary of the river flowing into
. A smaller number of tourists visit the
(village Davsha) and two ecological paths on the territory of the buffer zone where ecological tours are conducted. Out of the latter number approximately 10-30 (per year) are schoolchildren, 5-15 are students undergoing practical training. There have been cases of ornithological tours and photographic tours. Several groups of overseas researchers from , and have visited the coast of
Baikal to study its flora and fauna.