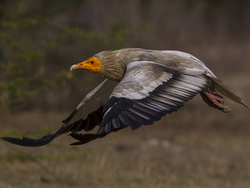 The climate is characterized by extremes, with very cold winters giving way with almost no transition into spring and torrid summers. Rainfall, scant and irregular is frequently torrential. The action of strong dry winds, particularly from the north-east (cierzos), accentuates the aridity of the area.

All this has made las Bardenas into a true cold desert in the heart of Europe, where the conditions of the great central Asian steppes are reproduced. This is reflected in the Aralo-Caspian vegetation that is to be found here and where species of halophile flora are predominant, adapted to living on saline soils in the depressions, giving way to Mediterranean forests of Aleppo Pine in the more thermophile areas of La Negra.

In terms of fauna, an abundance of birds of prey, such as the Griffon Vulture, the Egyptian Vulture, the Golden Eagle and the Peregrine Hawk are found in the Biosphere Reserve.

There is also a great diversity of grassland birds, such as the Great Bus-tard, the Little Bustard, the Eurasian Stone Curlew, the Black-bellied Sandgrouse and the rare Dupont Lark. 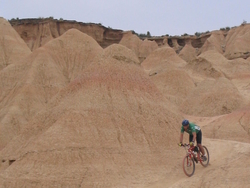 Traditional agriculture and animal husbandry. Military use at the rifle range included in the territory of the Bardenas, but not part of the Biosphere Reserve.