A short distance from Vancouver, the biosphere reserve encompasses the fjord and islands of Átl’ka7tsem/Howe Sound over a 218,723 ha, of which 16% are marine areas. This mountainous coastal ecosystem of great altitudinal range influenced by the Pacific Ocean, is home to high levels of biodiversity, with some 721 native terrestrial animal species including grizzly bears, wolverines and bald eagles. It also sustains thousands of marine species, including living glass sponge reefs, which were long thought to have gone extinct 40 million years ago.

Átl’ka7tsem (pronounced At-Kat-sum) is the Sḵwx̱wú7mesh/ Squamish word for paddling up the Sound and First Nation people have prospered in the region since time immemorial. 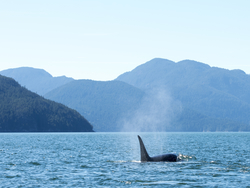 The rich mosaic of ecological systems found in southwestern BC are among the richest in Canada. It arises from the region’s topographical diversity, with an elevation range from sea level to almost 3,000 metres within a relatively short distance, its close proximity to the moderating effects of the ocean and its location among the most southerly latitudes in the country. These factors together create a dramatic range in climate from Canada’s warmest ‘mediterranean’ climate of warm dry summers and mild wet winters along the coastal lowlands, to the wettest climatic conditions in the country on higher west facing slopes, both contrasting with the extreme cold and heavy snow conditions at the highest elevations.

After more than 30 years of restoration, there are promising signs of recovery. Whales, dolphins and pink salmon have returned, and the estuary is once again a rich, productive ecosystem that is recognized internationally as an Important Bird Area. 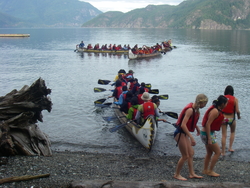 Today, Átl’ka7tsem/Howe Sound contains a total population of almost 46,000 persons, the vast majority of which are permanent residents. In addition, the region is situated on the doorstep of Metro Vancouver, the third largest city in Canada, with a population of about 2.6 million people. Otherwise known as Hwy 99, the unforgettably spectacular cliffside roadway Sea to Sky Highway is the main route from Metro Vancouver to the Resort Municipality of Whistler, home to 11,854 and visited by over 2 million during the year. There are three major communities within the AHSBR, each serving as anchors on the east and west sides of the Sound’s entrance: Gibsons to the west and Horseshoe Bay in West Vancouver to the east. Squamish/Brackendale are located at the north end of the fjord, with smaller communities distributed along its east and west shores, and a few permanently and seasonally inhabited islands in the Sound.

Sustainable forestry and ecotourism are the main economic activities of the biosphere reserve’s 50,000 inhabitants. Following unsustainable practices such as overfishing and polluting heavy industry, which had devastating impacts on the environment, a decisive shift toward conservation and responsible resource development was made in the mid-70s.

As land stewards and knowledge keepers, First Nations are key collaborators in co-creating the vision for Átl’ka7tsem/Howe Sound. In order to safeguard its cultural value and the holistic use of land and sea, the biosphere reserve’s governing body will ensure a balanced representation between First Nations, civil society and local authorities.