Os Ancares Lucenses e Montes de Cervantes, Navia e Becerrea Biosphere Reserve is located among the upper elevations of the Cantabrian Mountains in the north-west of Spain, in Galicia. Its isolated location limits many of the endemic flora and fauna species to the Reserve. Additionally, the biosphere reserve lies between the Euro-Siberian and Mediterranean biogeographic regions, leading to a highly complex biodiversity. Os Ancares Lucenses is part of the Eastern Sierras de Galicia, and its steep relief is surrounded by irregular valleys and rivers with strong currents such as Río Navia. The foothills of the Serra dos Ancares have a fairly regular morphology with gently undulating hills. Finally, Mustallar (1,924 metres high), Penalonga (1,842 metres high) and Corno Maldito (1,847 metres high) are the highest peaks in the Biosphere Reserve. 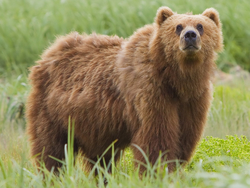 The geographic isolation of the reserve caused by the complexity of orographic features results in a well-preserved natural environment, containing endangered fauna species such as the Brown bear (Ursus arctos, considered priority specie). Among the invertebrates a number of species of great importance have been recorded, for example, crayfish (Austropotambius pallipes) or Quimper snail (Elona quimperiana).

Regarding amphibians and reptiles, there is a number of endangered species, such as the Gold-striped salamander (Chioglosa lusitanica), the West Iberian Painted Frog (Discoglossus galganoi), Iberian rock lizard (Iberolacerta monticola) or the Iberian emerald lizard (Lacerta schreiberi).

The different mountain levels host a great variety of types of forests. Birch forests (Betula alba), for example, occupy the highest parts of the shady slopes (1,400 - 1,700 metres), while forests containing Pyrenean oak are found mainly on sunny slopes, between 500 - 1,000 metres. These flora species, together with the common hazel (Corylus avellana) are considered the most common found in this Biosphere Reserve forests.

The Common holly tree (Ilex aquifolium) has a particular interest, since it is rarely seen in the Cantabrian Mountains and the area of Galicia. 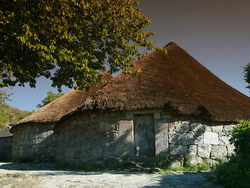 There are 2,850 permanent residents in the biosphere reserve. Due to orographic complexity, the biosphere reserve is characterized by a low population density. On the other hand, tourism in Os Ancares Lucenses Biosphere Reserve is an activity that has generated notable economic and social activity for decades.

The natural lanscape and cultural value of these mountains make them an ideal destination for nature and outdoor tourism, encompassing a wide range of activities, from sports to merely recreational or contemplative.

The area has an important set of traditional practices and activities that have a high ethnographic interest, like the use of semi-natural mountain meadows and chestnut in the soutos (chestnut forests), as well as beekeeping, which has some characteristic constructions that protect the hives from bears (cortines or albarizas).

Although in a very simplified way, the seasonal movement of cattle is still carried out during the summer season from the villages to the summer pastures, located in the brañas. For centuries, the extensive natural forests have been a source of wood for a lot of uses and trades. Horticultural crops have used and maintained specific ecotypes of the mountain area, characterized by their rusticity.

Finally, it is possible to cite a series of high-quality artisanal agricultural products and foodstuffs, like cheeses, meat products, or products obtained from the forest environment (honey, chestnuts or blueberries). The persistence of these traditional activities and productions is vital for the maintenance of the Reserve's cultural and natural heritage.

The group of megalithic burial mounds and chambers stands out from prehistoric times. They are known as mámoas or medorras and they represent a different type from those of the rest of the Peninsula. It is also remarkable the set of castros (pre-Roman fortifications) present in the territory, which constitute the form of settlement of the population from the Bronze Age to the end of Romanization, such as the Castro of Santa María in Cervantes.

The most outstanding feature of the historical and cultural heritage in the Reserve is the palloza (represented in its logo), a type of dwelling that materializes the survival of one of the oldest forms of habitation in the European context. Also noteworthy are the castles that certify the area's important medieval past, like Castles of Doiras, Frades and Quindous, in the municipality of Cervantes.

There are also other notable elements representative of traditional rural culture that have their own toponymy associated, such as hórreos, muíños (windmilld), fontes (sources), etc. The cultural value of the biosphere reserve is accentuated by tombs, dolmens, chapels and churches. For centuries, these chapels have had an enormous social influence as the most prestigious location for marriages and other celebrations and they are perfectly integrated into the physical environment and distributed throughout the territory.

Intangible cultural heritage is equally important, although scarcely studied. The rich and little studied toponymy of the territory stands out, as well as the numerous legends of oral tradition, the traditional celebrations and the traditional trades of the area.