The Aggtelek National Park lies in the Gömör-Torna Karst region, an area rich in unique natural and cultural assets. It is the first Hungarian national park to be dedicated to the protection of abiotic values, superficial land formations and caves. The subterranean natural treasures, namely the caves of the Aggtelek Karst and the Slovak Karst were inscribed on the UNESCO World Heritage List in 1995.

One of the most endearing treasures of the National Park is the Baradla Cave, which is the biggest and the most magnificent cave in Hungary. Excavations in and around the cave have proved that it has been a shelter to man for more than 7 000 years. 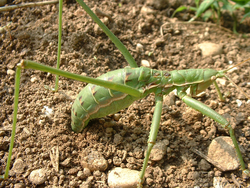 About three million years ago caves of the karst began to evolve. All the caves of the Aggtelek and Slovak Karst were entitled to World Heritage Sites by the UNESCO World Heritage Committee in 1995. Currently more than 1200 caves are known in the karst. The underground world is nearly untouched with a lot of different rock and mineral formations.

An outstanding richness of species is characteristic to the area: about 8000 animal species can be observed. Due to the geological location of the area, both species characteristic to high mountains, european lynx (Lynx lynx)  eurasian pygmy owl Glaucidium passerinum, Bielzia coerulans) and species preferring dry, warm habitats  matriarchal katydid (Saga pedo, rock bunting (Emberiza cia) can be seen. Because of the variable habitats, an extremely rich butterfly fauna could have also been evolved.

There are two small villages with approximately 1000 inhabitants inside the BR and 20 along the border of the BR. More than 40% of the population is unemployed. This high rate is due to the economic changes (collapsed industry and agricultural cooperatives). Generally the population is aging, young people move into the towns. Because of this fact the traditional cultivation methods are vanishing.

Most of the tourist activities are concentrated on tourist caves which are situated in the buffer zone. The number of people who visit also other parts of the BR is much smaller.  Among the recreation and sport activities the most popular ones are orienteering and hiking on tourist trails.