Located in the Chugaryeong Tectonic Valley, the Yeoncheon Imjin River Biosphere Reserve encompasses the entire county of Yeoncheon and the Imjin River basin. Its core area consists of forests and cultural heritage protection zones, with the Imjin River as its centrepiece. The Imjin River, mostly untouched by humans, is home to Korean endemic fish species, such as Acheilognathus gracilis and Tanakia signifier, and mammals, including water deer, otters and leopard cats. 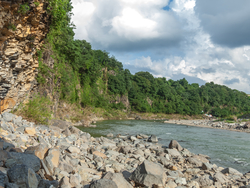 The Imjin River stands out as a particularly remarkable example in terms of conservation. Its topographical advantage, coupled with the restrictions on civilian activities resulting from the heavy presence of military facilities in adjacent localities, has left the river mostly untouched by humans. The ecological value of its upper course, which flows out from the DMZ, is especially outstanding because it enjoys double protection as both a military reservation and a water source protection area. High water quality and wide rapids make it the ideal spawning site for various natural monuments and endangered fish species such as Hemibarbus mylodon, Tanakia signifer, and Gobiobotia brevibarba, and Korean endemic fish species such as Nipponocypris koreanus, Coreoleuciscus splendidus, and Acheilognathus gracilis.

Notably, an abundance of wetlands near the river has provided sanctuary and habitats for various forms of wildlife, including water spiders, bean geese, greater whitefronted geese, eagles, golden eagles, otters, and leopard cats. 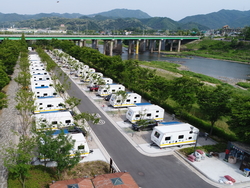 The Imjin River, which starts in the Masikryong Mountains in Deokwon County, South Hamgyeong Province, passes through the center of Yeoncheon, and joins with the Han River, has long served as an important basis for the lives of people in the region. However, the division of DPRK and ROK following the Korean War caused a disconnection between the Imjin River and the people, and the once lively river community gradually began to die down. The Korean War broke out on June 25, 1950, and the DMZ was established three years later. For a long time, Yeoncheon County was regarded as a region that was falling behind as local development faltered because of various legal regulations.

Yeoncheon has a very limited residential areas compared to its total surface area due to various legal regulations, such as the Military Protection Act and the Protection of Cultural Properties Act. Of the total population, 43.7% live in Jeongok village, while the remaining 56.3% are dispersed across other areas. There have been movements to revitalize Yeoncheon through developmental projects. Various construction projects are underway, such as an Imjin River amusement park and a Gorang Port history park. The Godaesan special district, which recently welcomed the Baekhak golf course theme park and a baseball stadium, was included as a transition area after consultation with the Imjin River Development Project Group, which is responsible for both enterprises.