This biosphere reserve is located in the northeast of the People’s Republic of China, within Szechuan province, about 150 km from Chengtu. Wolong’s Biogeographical Region lies in the polar arctic realm. Great mountain ranges with altitudes ranging from 1,150 to 6,250 metres above sea level traverse the reserve between the northeastern and southwestern boundaries. The variability of soil types within Wolong is especially remarkable. Each mountain layer contains a different type of soil, ranging from yellow soil, mountain black brown soil to mountain brown soil. These numerous soil types have stimulated the development of a rich biodiversity. 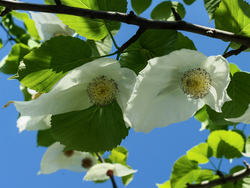 Approximately 4,000 plant species have been recorded in the various habitats of the reserve, such as evergreen forests, evergreen deciduous broadleaf forests, and mixed coniferous and broadleaf forests. Specific examples include the Davidia involucrate (Dove tree) and Larix mastersiana (a certain species of conifer). Gastrodia elata (a herb of the Orchidaceae family) is one of number of flora associated with traditional Chinese values, used for medical purposes. Altogether, 96 mammal species, 300 bird species and 1,700 insect species live in Wolong, while 30 fauna species are under legal protection, including many endangered or vulnerable animals, such as Lophophorus lhuysii (Chinese monal) and Ailuropoda melanoleuca (Giant panda). The presence of the world’s largest giant panda population was one of the main reasons for the designation of the biosphere reserve: more than 100 giant pandas inhabit the area, representing around 10% of China’s giant panda population. The protection of this umbrella species and its habitats has ensured the survival of all other species in the area.

While agriculture remains the major economic activity of local people (about 5,000 inhabitants in 1997), tourist activities are becoming a fundamental source of income. However, the construction of tourist facilities, as well as pressure from the large human population, are resulting in a number of impacts, such as the fragmentation of green corridors, which are important for the survival of the giant panda population. In addition, non-authorized firewood and medicinal plant collection present challenges for local authorities. Other challenges for the Wolong biosphere reserve include the promotion of sustainable tourism and the development of alternative income opportunities, for example, through the cultivation of medicinal plants. Past research within the biosphere reserve has focused on the ecology and biology of the giant panda. Today, however, the ecosystem approach and the rehabilitation of bamboo and forest ecosystems are playing an increasingly important role.