The Western Nghe An Biosphere Reserve is located in central Viet Nam in mountainous and remote area which is difficult to access. Its climate is strongly influenced by a north-east and south-west monsoon. The topography of the surrounding Annamite mountain range also impacts atmospheric circulation, resulting in significant climatic differences throughout the area. The region hosts some of the most diverse and rich flora and fauna in Viet Nam. 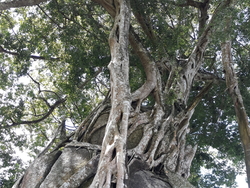 The biosphere reserve has three core areas including one national park and two nature reserves, covering almost of types of tropical rainforest and various habitats including mountain, wetlands, rivers and others.

An area of primary forest is located along the border with Laos. Recently, around 2,500 species of vegetation have been reported, with around 2,000 species (74%) belonging to the category of Phanerophytes.

There are, at present, 130 species of large and small mammals, including 295 bird species, 54 species of amphibians and reptiles, 84 species of fish and 39 species of bats found only in Viet Nam and north-east Thailand.

In addition, there are 14 species of tortoises, 305 species of butterflies and thousands of species of other insects, including 68 valuable and rare species recorded in the Red Book of Viet Nam.

There are 295 species of birds including local and migratory birds and 22 species considered to be globally threatened and endangered. Two populations are of global significance, including the crested argus (Rheinardia ocellata) and great hornbill (Buceros bicornis), the rufous-necked hornbill (Aceros nipalensis), while the lesser fish eagle (Ichthyophaga humilis) is of national significance.

The reserve is also home to the Gong culture of the Central Highlands of Viet Nam, which is inscribed on the list of UNESCO Intangible Cultural Heritage. 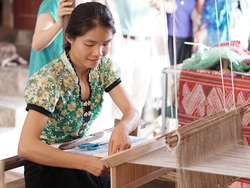 The majority of the inhabitants in the area belong to the Thaï ethnic group. Other ethnic groups include the Kho Mu, Kinh, O Du and H’Mong. The O Du population has inhabited the area since the tenth century but its numbers have dwindled. As of 2007, only 563 O Du people remained, living in poor conditions.

The main economic activities in the area are agriculture, cattle grazing, fishery, weaving and woodwork. In 2006, the Vietnamese government began construction of the Ban Ve hydroelectric plant in the area. The plant was built on the Nam Non River and covers a water surface area of 4,500 ha delivering up to 75.5 MW.