The Uvs Nuur Basin (1,068,853 ha), is the northernmost of the enclosed basins of Central Asia. It takes its name from Uvs Nuur Lake, a large, shallow and very saline lake, important for migrating birds, waterfowl and seabirds. The site is made up of twelve protected areas representing the major biomes of eastern Eurasia. 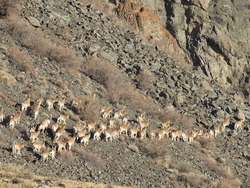 The Uvs nuur basin is one of the key areas of the Altai-Sayan Ecoregion, included in the Global 200 list of the virgin or little-modified ecoregions of the world. The northern part of the basin is located in the Russian Federation on the territory of three administrative districts (Kozhuuns) of the Republic of Tuva. The southern part of the basin is located on the territory of Uvs aimag of Mongolia. The geographical position and climate of the Uvs lake depression are distinguished by an exceptional contrast, due to its position in the center of Asia with a relative high altitude and a peculiar relief structure. The highest point of these territory is the peak of the Turgen Mountain Range and the lowest point is the Uvs lake. The Uvs Lake’s water is remainder of a huge saline sea, which covered a much larger area several thousand years ago.

The Uvs nuur basin and its surroundings boast an extraordinary landscape diversity ranging from cold desert and steppe to floodplain forests and diverse wetlands, fixed sand dunes and even tundra. The basin is characterized by mixed mountains and highland systems with a total size of 70.000 km2. The lake is the largest lake in Mongolia and has a length of 84 km and a width of 79 km, with an average depth of 6 m and covers 3,350 km² at 759 m above sea level.

The Biosphere Reserve serves as a significance scientific place for studying the evolution of the environment from the Ice Age to present-day conditions due to the remnant glaciers, Pleistocene ice sheets and numerous glacial lakes. The diverse landscape is inhabited by a rich diversity of species, including locally endemic plants and endangered species like the snow leopard.

Apart from the main lake Uvs, the basin comprises several smaller lakes. As these lakes lie to the north of other inland seas of Central Asia, they are an important places for waterfowl migration. With its reed beds and river deltas, it provides significant nesting and resting areas for 215 migratory water bird species such as White-headed Duck (Oxyura leucocephala), Swan Goose (Anser cygnoides), both are 'endangered' species, which included in the Red List of IUCN, and many other nationally and globally threatened flora and fauna species including endemic fish Oreoleuciscus potanini, Oreoleuciscus pewzowi, Oreoleuciscus humilis.

The area’s value is not limited to its natural peculiarities. It is also an important place for conservation of its cultural heritage and harbors of still unstudied archaeological artifacts. No other place in Central Asia manifests such a high concentration of burial mounds, many older than the Egyptian pyramids. Thousands of carved drawings and stone sculptures – remnants of Middle Age settlements and Buddhist temples – shape the inimitable appearance of the natural and cultural landscape. The historical, cultural and spiritual importance of the landscape and many of its features are reflected in countless artifacts and archaeological sites and in the contemporary life, knowledge, resource use, songs and legends of local and indigenous communities.

The lack of industry and the reliance of the inhabitants on traditional ways such as nomadic pasturing have little impact on the landscape and allow the ecosystem to remain relative pristine.