The Unnamed Biosphere Reserve is located in the central desert biogeographical region of Australia and includes part of the Great Victoria Desert. It is one of the least altered landscapes in the region and consists of a semi-desert dune system, which comprises low dunes that reach up to 20 m high and 100 km long with clay pans and saline areas in lakebeds.

Aboriginal lands from the Oak Valley, Tjuntjuntjara, Wataru and Yulata communities provide buffer zones surrounding the core area. Some 200 people live within the biosphere reserve (2002) and engage in hunting and foraging activities. Aboriginal communities hunt kangaroos and reptiles and use some plants for traditional foods. 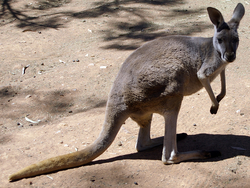 The Unnamed Biosphere Reserve contains an arid zone wilderness and a semi-desert dune system including parts of the Great Victoria Desert. Situated within the Officer Basin it encompasses palaeodrainage channels and serpentine lakes within the Great Victoria Desert. Other features include red sand dunes covered with desert karrajong, acacias, desert gums and salt lakes.

Approximately 200 people live in the area, which is of cultural significance to the Maralinga Tjarutja people. There are several Aboriginal cultural sites within the park where ceremonial activities take place. With the exception of small numbers of tourists economic activity is minimal, however local aboriginal communities hunt and forage in the reserve.