The Touran Biosphere Reserve is located in the Anatolian Iran deserts and comprises a variety of salt, gypsum, stone and sandy habitats. It covers both clay lowlands and mountains and reaches altitudes of more than 2,200 m above sea level.

Communities in the area depend mostly on agriculture, animal husbandry, horticulture and carpet sewing. Major human impacts on the ecosystem arise from overgrazing, especially by camels, illegal hunting and fuel wood harvesting. 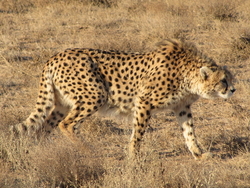 The Touran Biosphere Reserve is the largest complex of protected areas in Iran covering an area of around 1,459,506.2 hectares. The reserve is located to the south of Shahroud county (Semnan Province), with a smaller section situated to the south-east of Khoranasn Province. The climate of the region is cold arid (as determined by the Ambrege method). The area encompasses a range of mountains, ridges, plains, sand dunes and sand sheets.

Wild mammals are the most important fauna species found in the reserve at present. Due to the strong dependency of mammals on their environment, they are treated as indicators of their habitats. Forty-one mammal species live in the Touran area with key species including the Asian Cheetah (Acinonyx jubutus venaticus), Iranian Zebra (Equus hemionus onager) and the Turkestan sand cat (Felis Margarita thinobia). Other key species include two bird species, namely the Iranian Ground Jay (Podoces pleskei) and the Houbara bustard (Chlamydotis undulate), and the Monitor lizard (Veranus greseus caspius). 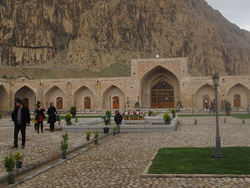 The main historical-archaeological attractions of the region are Abbasi caravanserais, located on the main Tehran – Mashhad route, which have been the focus of efforts by the Department of Cultural Heritage and Tourism of the Semnan Province aimed at renovating and developing surrounding tourism infrastructure. Other historic-archaeological sites of the region include forts and castles, although many are in a state of deterioration due to abandonment.