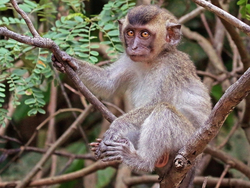 The whole area consists of three different habitats: the Tonle Sap Lake in the centre, which is surrounded by floodplains and freshwater swamps, and seasonally flooded rice fields and grasslands located near two national roads that define the reserve’s outer boundary. During periods of rainfall, the Mekong River overflows, expanding the size of the lake by up to five times. The water level in numerous other streams around the lake also rises leading to the creation of a complex delta system, which provides habitats for a variety of species with different characteristics. A Ramsar site is also situated within Tonle Sap, known as the Boeung Chhmar and Associated River System and Floodplain.

The richest vegetation in the Tonle Sap reserve can be found in the Stung Sen Core Area and river mouth, gallery forests, and the outer floodplains north of Bak Prea. Tall forests characterized by unique biodiversity grow in the Stung Sen Core Area. The gallery forests endure the rainfall periods, which last six to eight months. Because of its short stature upland vegetation, the outer floodplain has a higher level of diversity than the areas surrounding the Tonle Sap Lake. Moreover, 80% of the floodplains are covered by swamp scrubland. Two hundred higher plant species, many of which have adapted to the rainy and dry seasons, can be found within the reserve. In addition, flooded forests serve as a natural protection barrier for villages against inundations and soil erosion.

Fish represent the largest group of vertebrate species in the Biosphere Reserve; however, the highly effective ecosystem, and the flooded forests in particular, provide crucial habitats for many flora and fauna species. Examples of common species in Tonle Sap include Macaca fascicularis (long-tailed macaque) and Lutra sumatrana(hairy-nosed otter). In addition, there are vulnerable and endangered species such as Heliopais personata (Masked Finfoot) and Leptoptilos dubius (Greater Adjutant). Overall, 225 bird species live within Tonle Sap of which 17 are endangered worldwide. Nine important bird areas serve as protection and conservation sites – these are located at the reserve’s boundary and cover approximately 23% of the total area. 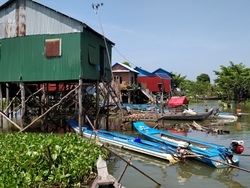 Over 300 people visit the Biosphere Reserve seasonally and 1,380,615 reside there permanently. The ethnic origins of residents include Cham, Vietnamese and Khmer, the latter comprising 90% of all residents. Four major towns are located within the buffer zone: Chhnuk Trou, Kampong Luong, Bak Prea and Chong Khneas.

Tonle Sap Lake is one of the top four fishery production areas in the world. To further promote commerce, a large harbour is under construction at Chong Khneas. Overfishing is a key issue, however: eight fish sanctuaries, which cover 1.7% of the Biosphere Reserve’s total area, aim to protect endangered and vulnerable fish species. Other animals of traditional or commercial importance include several turtle species, for example, Malayemys subtrijuga, a species traditionally thought to bring good luck to inhabitants of the reserve. Crocodylus siamensis (Siamese Crocodile), on the other hand, is of high commercial value and has consequently become endangered. Aquaculture, fishery and agriculture (cultivation of rice) are the main economic activities in Tonle Sap.