Togean Tojo Una-Una Biosphere Reserve is located in the centre of the world’s coral reef triangle, which has the highest diversity of coral species in the world. The biosphere reserve is home to around 149,214 people, the great majority of whom are local people (fisherman) in the transition area in the main settlements of the city of Ampana. 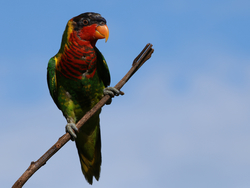 Togean Tojo Una-Una Biosphere Reserve is located in the centre of the world’s coral reef triangle, which has the highest diversity of coral species in the world.

As an archipelago, the flora in the core area of the Togean Tojo Una-Una Biosphere Reserve area is grouped into two, namely terrestrial flora and aquatic flora. Lowland forests cover part of the land area of the Togean Islands. The composition of forests and oceans in the Togean Islands is considered unique due to the location of these islands in the Wallacea Line and Weber line, thus affecting the biodiversity in them. Based on a field survey and a study of the 2004 Integrated Team throughout the Togean Islands, 363 species of flora were recorded. The flora in Togean Island includes species of palapi (Heritiera javanica), ironwood (Intsia bijuga), siuri/ranggu (Koordersiodendron pinnatum), uru (Magnolia vrieseana), flakes (Elmerrillia sp.), and several species of Dipterocarpaceae such as Shorea sp., Dipterocarpus sp., and Hopea sp. In the forest area that was opened, species were found including soap tree (Alphitonia excelsa), Cananga tree (Cananga odorata), kadam (Anthocephalus chinensis), Jackapple (Alstonia spectabilis), Mallotus sp., Macaranga sp., Yellow cheesewood (Nauclea orientalis), and Crima/Bintuang (Octomeles sumatrana). 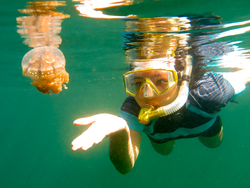 Local people utilise mangrove forests as fishing ground of crabs, shrimp, shellfish, fish and othersas well as for building material and firewood. As an archipelago, proposed Togean Tojo Una-Una Biosphere Reserve consisting of small islands and oceans, the region has a relatively high diversity of fish species. The fish diversity of Togean Island National Park found approximately 596 fish species. Some fishes are the main products for local community and have high economic value in the region. Besides fish, sea cucumber is also a high market price species.