Almost all of the Reserve areas are covered by wetland (freshwater lake, Tasik Chini and feeder rivers of the lake) and a slightly steep hill (Chini Hill) as well as the Tasik Chini State Park Reserve Forest.

The freshwater lake, together with the drainage basin, the gazzetted Tasik Chini State Park including the 641 m Bukit Chini showed habitats that are endemic only to Tasik Chini which represent habitat only found in this area.

Other species characteristic of the extreme lowlands may also be present and are of considerable conservation interest due to their diminishing low land habitats elsewhere within Peninsular Malaysia.

The natural freshwater lake included in the Reserve, has its own economical benefits. Of the two beautiful natural lakes in Peninsular Malaysia, Tasik Chini is the second largest natural lake which is located 100 km away from the state capital of Pahang called Kuantan. With the barraging of the only river, Sungai Chini, that drains the lake, Tasik Chini is always flooded even during the drier season to encourage ecotourism throughout the year. 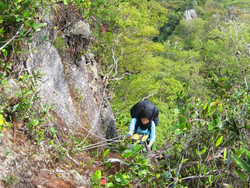 The government and local communities are integrally involvedin all resource planning and management initiativesin the region. Forest management occurs within the context of the most stringent government-sponsored guidelines in Malaysia, under the guidance of a joint government-local community and government management board; on going ecosystem health is the primary consideration in all development decisions.

For sustaining the natural lake as an ecotourism site it has to be managed sustainably. An initiative by one of the leading local university in Malaysia, University Kebangsaan Malaysia Tasik Chini Research Centre was formed to overseer research and Integrated Water Research Management (IWRM) programmers in Tasik Chini.

The researches are based on freshwater and terrestrial ecosystems, management, pollution, services, ecotourism, ecohydrology and community of the Orang Asli living in the area. Such research opportunities are attracting scientists and students from around the world to this area.