This biosphere reserve and national park is situated on the Tanjung Peninsula in the south of Borneo and covers the swampy alluvial areas between Kumai Bay and Seruyan River. 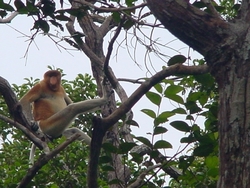 The biosphere reserve comprises a large spectrum of ecosystems such as remnants of dryland dipterocarp forests, peripheral mixed swamp forests, peat swamp forests, mangrove and coastal beach forests, and secondary forests. The Tanjung Puting National Park was primarily established by the Dutch colonial government for the protection of the orang-utan (Pongo pygmaeus) and Proboscis monkey (Nasalis larvatus) in the 1930’s. Today, these animals are the main tourist attractions, however the number of visitors is still modest (3,600 in 1996). Iron wood (Eusideroxylon zwageri) and ramin (Gonystylus bancanus) are among the plant species of high importance from a conservation point of view.

Clouded leopard (Neofelis nebulosa), and leopard cat (Prionailurus bengalensis borneoensis) have also been recorded. Reptiles include estuarine crocodile (Crocodylus porosus) and false gharial (Tomistoma schlegelii). A rich avifauna is present with over than 200 species having been recorded, including the endangered and rare species storm stork (Ciconia stormii), many kinds of kingfishers, hornbills, oriental darter, and herons.

The peat swamp forest is characterized by ramin (Gonystylus bancanus), a species which is in high commercial demand and becoming increasingly rare. Other plant species include pandans (Pandanus tectorius) and nipa (Nypa fruticans), commonly found along the riverbanks.

The mangrove communities and associated species are dominated by Rhizophora spp., Bruguiera sp., Sonneratia sp. and Xylocapus granatum. The vegetation supports a large population of wildlife making it one of the most important areas for the preservation of primates, birds, fish and other wildlife species. 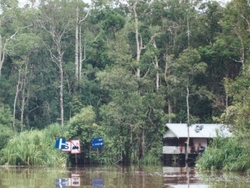 Among these, the most potential threat to the sustainable management of the area is illegal logging.

The rehabilitation effort of the area becomes an important action to be implemented in order to improve the sustainable management and preservation of the flora and fauna of this area and maintain the balance of the Tanjung Puting as a whole ecosystem.

Furthermore, Tanjung Puting plays as important role as a centre for orang-utan rehabilitation. There are currently few sources of alternative income for the local community living in the surrounding areas. And there is a need to find appropriate strategies and mechanisms to develop sustainable alternative livelihoods to support the local communities. Thus, the behaviour towards and reliance of the local communities on the forest resources can be minimized and their positive perception can be enhanced. Some studies to identify and recommend alternative sources of livelihoods have been carried out agro-forestry, agriculture and fish farming.