The Snake Island–Laotie Mountain biosphere reserve is located in the west of the Dalian Lushunkou District and covers a total area of 9 072 hectares. Among its primary targets for protection are the Agkistrodon shedaoensis snake, migratory birds and ecological environments. 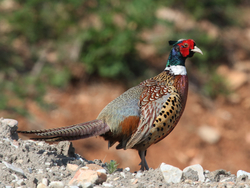 Snake Island is located in the northwest part of the Bohai Sea. It covers an area of 73 hectares and is host to about 20 000 venomous pit vipers, Gloydius shedaoensis, a species endemic to the island. The Gloydius shedaoensis feed on small migratory birds and their two peak periods of activity are synchronous with the migrations. Snake Island forms part of an independent island ecological system called the ‘Gloydius Shedaoensis-Migratory Birds Environment’. In 2004, Gloydius shedaoensis was listed on the China Red Data Book of Endangered Animals and categorized as ‘critically endangered’.

The Laotie Mountain is located at the southern tip of the Liaodong Peninsula and faces the Yellow Sea to the west and the Bohai Sea to the east. It is an important ‘node’ for bird migration with over 10 million birds migrating through the area. There are four types of vegetation: forest, brush, shrub-meadow and meadow. The existing fauna record includes 703 species of plants, 217 species of amphibians, 10 species of reptiles and 307 species of birds. 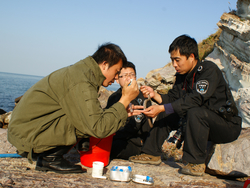 The biosphere reserve has more than 6 000 inhabitants including permanent residents and a temporary population, mainly distributed throughout the transition zone. Most of the population is Han (98.2 percent) with a minority of Manchu, Mongolian, Hui and Korean (1.8 percent). Local residents mainly plant cherry and apple trees, raise poultry, and breed sheep, mink, raccoon and fox. Only a small percentage of residents cultivate wheat, corn and other crops.