Siberut is the largest in the chain of four Mentawai Islands situated off the west coast of Sumatra.

It has been isolated from the Sumatra mainland and the Sunda shelf for at least 500,000 years, resulting in an exceptionally high degree of endemism. 65 % of the animals are though to be endemic. Lowland dipterocarp rain forest is the principal ecosystem. 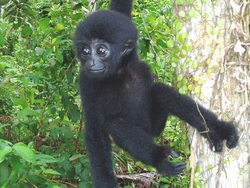 Siberut Island is isolated from the mainland Sunda shelf by the Mentawai Strait, with about 155 kilometres in distance from Padang, the capital city of the West Sumatra Province.

The forest area is still relatively natural, with large trees. Sixty-five percent of mammals and fifteen percent of fauna on Siberut are endemic at some taxonomic level, making the island, with its limited surface, unique in the world. 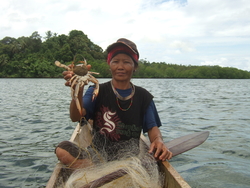 The Mentawai communities on Siberut Island still largely embrace a sub-economic system, relying on the existing natural resources of the Siberut National Park.

The traditional wisdom of the local communities allows them to utilize the natural resources of the forest carefully. Day-to-day activities of the people in this area relate to the usage of natural resources, for example through hunting, growing crops, gardening, farming, harvesting sandalwood and cane, and medicinal plants.

Along with the change of time, as the socio-cultural, economic, and policy situations also have changed, new ways of exploiting natural resources have been brought to the area. The large-scale logging concessions that have been issued, revoked and then reissued again represent a scheme of resource exploitation which is incompatible with sustainable conservation of the biological and cultural diversity that make the island unique.