This biosphere reserve is located in the Beiby Gulf Area of Guangxi Autonomous region in the southernmost part of China. It supports several mangrove species endangered in China (Rhizophora stylosa, Bruguiera gymnorrhiza), as well as rare seagrass species and the sea mammal Dugong dugong, which shows great significance for biodiversity conservation. The main economic activities in the Reserve are rice and commercial crop cultivation as well as livestock husbandry, mariculture and shallow water fishing. 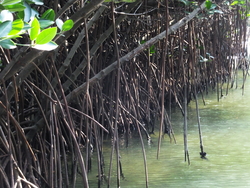 Shankou Mangrove Biosphere Reserve is composed of the east and west terrestrial and coastal waters of Shatian peninsula and can be divided into Yingluo Harbor district and Dandou Sea. The reserve is a marine wetland located in the coastal transition zone. As a representative of typical terrace seacoasts and mangrove biological seacoasts in Guangxi, the land with tortuous shoreline intertwines with the sea, the hilly land extending to the sea while the gulf coming inland, where the gentle breeze and slow water flow are appropriate for the growth of mangroves. The highest peak in the reserve is Hongkan Ridge with an elevation of 30.1m and the undulating coastal plain terraces are usually 10~20m above sea level. There are three small seasonal streams and a number of small reservoir marshes in the reserve, developed tidal creek within the mangrove areas with deep and thick mud, and artificial breeding belt of shellfish in the bund.

Most of the local people are originally from the Fujian coast area (eastern China) and are descendants of Han nationality. People living in the Biosphere Reserve are mainly engaged in agriculture, fishery, aquaculture industry, tertiary industry and labor export. The reserve maintains the traditional lifestyle of utilizing mangroves and their biodiversity among local residents, such as the traditional sea mining operations, and edible and seafood and so on. Development opportunities include sustainable mariculture (mudflat and offshore mariculture, including pearl cultivation), further development of ecotourism, shoreline protection, duck-raising, bee-keeping, processing of edible fruits of the mangrove species Avicennia marina etc. Frequent visits by local and national officials provide scope for demonstration and improvement of protection and resource use strategies in China’s marine coastal environment. Shankou Mangrove Biosphere Reserve also offers considerable potential for collaborative activities with other mangrove biosphere reserves in the region, such as Ranong Biosphere Reserve in Thailand and Can Gio Mangrove Biosphere Reserve in Vietnam.