The Riverland Biosphere Reserve is located in the biogeographical region of the Murray River Basin in southern Australia. Two different habitats form the reserve’s topography – the Mallee woodland which consists of limestone and sands and the River Murray floodplain. Extensive wetlands created by creeks and oxbow lakes are situated along an ancient river in this floodplain. Weirs and locks have resulted in an elevation of the water level, transforming these dry areas into wetlands. Three types of land surround the reserve and can also be found in the inner area – limestone that developed from complex geological processes, terraces that include gypsum areas and the floodplain. 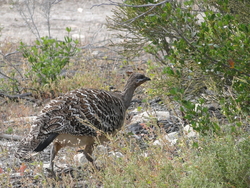 Within the Riverland Biosphere Reserve live 275 bird species, 79 reptile species and 843 plant species. Endangered or threatened animal species include the Mallee Fowl, Green Tree Frog and Carpet Snake. Numerous projects and programmes dedicated to the protection of flora and fauna contribute to the reserve’s sustainable management practices. Efforts to re-introduce vegetation to degraded sites is pursued by controlling the water levels in wetlands and planting seeds and trees. Various structures have also been installed to recreate the cycle of wet and dry periods in the wetlands.

Agriculture, limited livestock rearing and horticulture play a significant role in the economy of the biosphere reserve, with the production of wine grapes resulting in a dramatic rise in income. For this reason, wine grapes have replaced and decreased the number of fruit trees. However, other trees have also been removed for agricultural purposes. As a consequence, there has been an increase in salinity-related issues due to erosion and flooding.

At least five Aboriginal tribes resided in the reserve for over 12,000 years. However, due to European settlements that commenced in the 1880s, these original tribes no longer inhabit the area. The number of settlers increased following the introduction of irrigation by the Chaffey brothers in 1887. About 516 people visit the reserve seasonally and 17,024 residents live there permanently. The Riverland Biosphere Reserve includes a number of small towns and the major towns of Renmark, Berri and Barmera. Around 216,000 national and 4,600 foreign tourists visit the reserve annually to fish or live in houseboats. Ecotourism and nature tourism are also becoming increasingly popular within the reserve.