The biosphere includes Lombok Island, part of the Lesser Sunda Islands. It consists of relatively flat coastal areas and hilly and mountainous areas. The highest peak is Mount Rinjani, the second highest volcanic mountain in Indonesia (3,726 metres above sea level). It has a very high level of biodiversity, comprising various types of forest vegetation (savannah forest, mountain and lowland rain forest), about 40% of which are primary forests. The inhabitants’ main sources of revenue comes from horticultural (vegetables and fruits), cereal crops (rice), animal husbandry (cows, goats and chickens) and the cultivation of coffee and cacao. 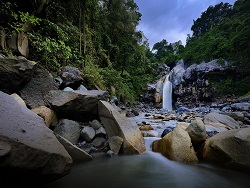 The biosphere reserve is a lowland area from the coast to hilly and mountainous areas with varying heights from 0 m to 3,726 m above sea level, while slopes range from ramps (0-15%), moderate (15-25%), sloping (25-40%) and heavy sloping (more than 40%). A relatively sloping area located in the South and Northeast lies at an altitude of 0-1,500 m above sea level at the foothill of Mount Rinjani. The highest peak is Mount Rinjani (3,726 m above sea level). Adjacent mountains are seperated by vast valleys, deep ravines with steep and rocky slopes. In the western valley of Mount Rinjani, there is Segara Anak Lake (2,100 m above sea level) with waters rich in sulphur. In the middle of the Segara Anak Lake, the “new volcano” called Mount Barujari (2.376 m) has raised. The volcano is still active and the last eruption occurred in 2009. 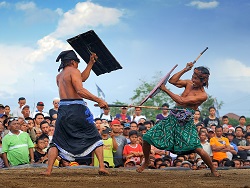 Total population living in Rinjani-Lombok BR are 3,394,280 people.. No community lives in the core area of the reserve. People living in the buffer zone and transition area consists of Sasak tribe, Javanese, Balinese, Maduranese, Chinese and Arabian and several immigrant communities from various islands in Indonesia. Sasak people dominate the number of about 80% of the total population of the island of Lombok. Sasak tribe is closely related to the Bali tribe, but mostly they are moslem.