Niubeiliang Nature Reserve hosts typical representative fauna and flora for Qinling Mountain, although the relatively undisturbed natural forests have recorded the highest biodiversity in the Eastern Qinling Mountain. Residents in the transition zone have developed various innovative land-based industries in cooperation with research institutions that are also active in scientific research and monitoring. 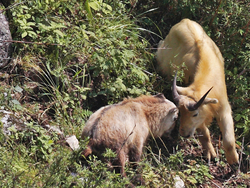 Niubeiliang Biosphere Reserve belongs to the sub alpine zone, mainly mountain landscape. Niubeiliang (elevation  2,802 m) is the highest peak of the eastern segment of Qinling. In the southern slope of the reserve there are ravines and cliffs; in the upper  northern slopes there are platforms and slight grades in the fold-fault zone of Qinling.

Niubeiliang has a typical temperate broad-leaved mixed mountain forest system. More than 94% of the Biosphere Reserve is covered by forests, shared by three administrative counties (Chang’an, Ningshan and Zhashui). The Biosphere Reserve is the habitat of many endangered and rare animal and plant species, including Golden Takin (Budorcas taxicolor bedfordi) and Dwarf Musk Deer (Moschus berezovskii), and it constitutes a natural gene bank. This reserve is also one of the typical study sites for vegetation, having a great value for protection and research.

950 species of seed-plant have been recordedof which 71 are medicinal plants, 110 oil and aromatic plants, 60 fiber plants, 84 starch and saccharides plants, 63 tanning plants.  There are 60 species of mammals, 124 species of birds, 7 species of amphibians, 20 reptiles, and 7 fish species

The region has been regarded as an important water conservation region for Xi’an, a provincial level city and southern Shaanxi province. 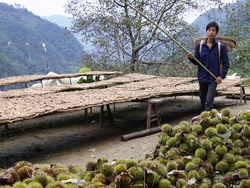 The core areas, buffer zone and transition zone had belonged to Yingpan, Shagou, Peiyu, and Nanwutai forest farms, for forest management mainly logging. With the establishment of Niubeiliang Nature Reserve in June, 1987, these forest lands have been protected effectively.

There are around 5,300 people in the transition zone, involving three adjacent counties. Local residents in the transition area have developed rural tourism for increasing their incomes. Activities in the transition area of Niubeiliang include agriculture (mainly corns, soybeans, potato), animal husbandry (pigs, sheep, chickens, bees) and forest products (walnut and chestnut). Cooperation with colleges and research institutions, research, monitoring, public awareness and training programmes has been actively developed.