Nanda Devi Biosphere Reserve, located in the Himalayan Mountains in the northern part of the country, includes as core areas the Nanda Devi and Valley of Flowers National Parks, which are one World Heritage site. Nanda Devi National Park has remained more or less intact because of its inaccessibility. The Valley of Flowers National Park is renowned for its meadows of endemic alpine flowers and outstanding natural beauty. Together they encompass a unique transition zone between the mountain ranges of the Zanskar and Great Himalaya. 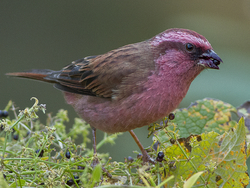 The area has a large altitudinal range (1,800 to 7,817 m) and is dominated by the peak of Nanda Devi. The unique topography, climate, soil and biogeographical location of the Biosphere Reserve gives rise to diverse habitats, communities and ecosystems, and a large number of ecologically and economically important species. Some 1,000-plant species including lichens, fungi, bryophytes and pteridophytes have been recorded. The percentage of native and endemic species is high compared to non-native species. Over 55% of the species are native to Himalaya, over 10 are endemic and 225 are near endemic. Among these plant resources, the inhabitants of the Pindari, Lata-Tolma-Malari, and the Valley of Flowers areas use 224 species for various purposes such as medicine, food, and animal fodder.

Over 15,000 people live in the Biosphere Reserve. The buffer zone includes 45 villages and the local communities living here mainly belong to two ethnic groups, the Indo-Mongoloid (Bhotia) and Indo-Aryan.

The transition area includes over 55 villages and is mostly inhabited by Schedule tribes, Schedule Castes Brahmins and Rajputs. The local communities practice marginal subsistence agriculture, rear cattle for milk and sheep for wool. Cultivation of medicinal plants, sheep farming, apiculture and horticulture are among the main income sources of the villagers. Local communities in the Lata-Tolma-Malari and Pindari areas are benefiting from the development of alternative sources of income, such as ecotourism, and from the improvement of a rich variety of agricultural activities. The snow clad peaks, presence of over 30 glaciers, occurrence of charismatic animals and birds, deep and vast valleys, meadows and rivers, and a unique culture of the native communities make the Biosphere Reserve ideal for ecotourism.