The Mount Chilbo Biosphere Reserve is part of the Great Paektu Mountain Range, formed in the eastern coast of the Korean Peninsula by fault movement and volcanic eruption during the late Neogene and early Quaternary period. The Mt. Chilbo Mountains embrace 700m to 1103m mountains forming a middle-altitudinal landscape whilst the Chilbo Stream flows through the Mt. Chilbo Biosphere Reserve to the Korean Peninsula. Mount Chilbo holds enormous cultural heritage, notably through the Kaesim Temple with its thousand year old history (built in 826), and ten other State Natural Monuments. This biosphere reserve covers an area of 50,340 hectares with its highest elevation above sea level being 1,103m and lowest at 13m. Among its primary targets for protection are the Tricholoma matsutake and its spectacular ecological environments. 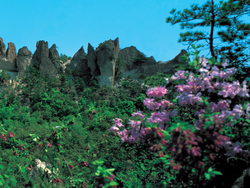 Four types of ecosystem can be found in Mt Chilbo; Forest, Agriculture, Freshwater and Coastal ecosystems. Biogeographically this BR belongs to the temperate deciduous forest ecosystem.

The ravines and steep rocky cliffs in the coastal area of the Korean Peninsula make the unique scenery even more breathtaking for its large and small-sized waterfalls. The diverse natural landscapes, like the dense forests, also enhance the conservation value of the Mt. Chilbo area. The soil is

dark brown forest soil formed mainly by granite and basalt. Mt. Chilbo BR has an inland climate in the Inner Chilbo, a continental climate in Outer Chilbo and an oceanic climate in Sea Chilbo.

With its natural beauty comes an altitudinal series of forest habitats: temperate coniferous forest, mixed forest and low-land pine-dominated forest. The existing fauna record includes 827 species of plants and 274 species of vertebrates; 39 species of mammals, 192 species of birds, 21 species of amphibians and reptiles. This BR is of tremendous importance in biodiversity conservation due to its distribution of 16 species of plants endemic to Korea in addition to its 30 species of nationally and globally endangered plants and animals. It has 10 threatened plant species including: Celtis edulis, Phellodendron sachalinense and Exochorda serratifolia and over 10 threatened animals such as: Urus thibetanus, Dryocopus martius etc. Mt. Chilbo has abundant resources of medical plants, wild fruits and vegetables but most importantly, the endemic Korean mushroom Tricholoma matsutake. 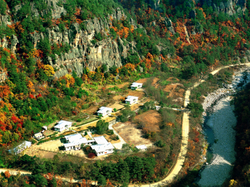 Although no inhabitants live within the core area, 250 people inhabit the buffer zone and 57,569 occupy the transition area. The buffer zone around the core area is established in forest ecosystems, and is used for research, tourism and education. The transition area occupies forest, arable land and coastal areas for the purpose of sustainable development. There are neither ethnic groups nor indigenous people living in or near the proposed biosphere reserve other than Korean citizens. Economic activities are mainly conducted in the buffer zone and transition area of this biosphere reserve. Tourism in the buffer zone, agriculture and fishery in the transition area are the main activities in this biosphere reserve. With rice, maize, vegetables and fruits as key crops, farming activities are mainly focused on cultivating non-paddy field crops, fruit and sericulture. The genetic diversity of 132 species of medicinal herbs (Panax schinseng) provides great potential in fostering the sustainable development of the ecosystem and regional economy as well as being a high proportion of economic activities. In addition to this, Mt. Chilbo has about 160 tourist attractions and has already developed infrastructure for tourism, handling myriads of visitors on an annual basis.