It is of high importance from a biodiversity, cultural as well as archaeological point of view. Approximately 90% of the area is montane forest above 1,000 meters altitude, representing most of Sulawesis’ unique mountain flora and fauna. 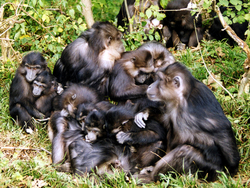 Lore Lindu National Park is one of Sulawesi’s important natural reservation sites, which is home to a wide variety flora and fauna in this Island.

The Park is located about 60 kilometres south of Palu. It covers a large area, consisting of lowland and highland mountain forests, thick wood forests, flat fertile valleys, rivers, lakes and hot springs, with a total area of 217,991.18 hectares and altitude ranging from 200 to 2,610 metres above sea level.

The park, with its beauti-ful scenery, holds a great number of endemic flora and fauna, and sits at the Wallacea line which is a shifting zone between Asia and Australia.

The Park also makes up a water reservoir for three main rivers in Central Sulawesi, which are the Lariang, Gumbasa and Palu Rivers. The rugged interior of the park is home to the Sulawesi’s largest native animals, such as anoas, babi rusas, tersiers, tonkeana macaques, marsupials, and Sulawesi’s largest mammal carnivore called civet.

The park harbours at least five species of squirrels and 31 of its 38 rat species are endemic. There are at least 55 species of bats and 267 birds, including the maleo birds, red-knobbed hornbills. The largest red-knobbed hornbill locally known as “allo”, inhabits this park. Thousand of weird and wonderful insect species can be seen around the park and many of them are attractive species, such as butteflies which can be seen as they fly along the water course, or drink from puddles and mudbanks. 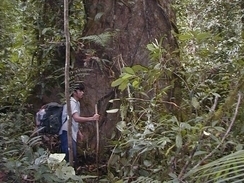 There are four main ethnic groups inhabiting villages in and surrounding the Lore Lindu National Park: Kaili, Behoa, Bada and Pekurehua. About 117 villages are situated in the park, and other 64 villages in the border area. Rice and maize farming, and cacao plantation are among the main livelihood activities of the local people.

The park has been facing several threats in recent times, particularly from massive illegal logging, hunting and poaching. To prevent the park from further damages due to the human induced activities, better management is imposed in such away that community involvement and empowerment along with poverty alleviation are intensively promoted in the frame of the park management plan command implementation.

In that regards, based on the park’s vision and mission, community development, management coordination and collaboration are the main factors of the park management as a whole.