The Lake Oromeeh Biosphere Reserve is located at Lake Oromeeh in the north of Iran and forms part of the Caucasus-Iranian Highlands. Salt flats can be found around the lakeshore, while the islands host pistachio forests and Artemisia steppe communities. Other habitats found in the reserve include wetlands, river estuaries, and sandy soils and coasts. 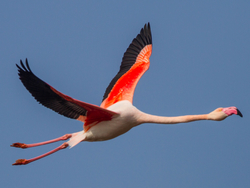 The Lake Oromeeh Biosphere Reserve is one of the most important and valuable aquatic ecosystems in the country. The lake is surrounded by several freshwater wetlands, that produce an area of high ecological significance. Lake Oromeeh is also the largest water body of its kind in the country and is listed as a Ramsar Site for its unique natural and ecological values.

The lake and its surrounding wetlands constitute the main habitat for large algae populations, which play an important role in the food chain of the lake. For this reason, Lake Oromeeh is home to many migratory birds during winter months. In addition, the islands in the lake provide habitats for a large number of breeding flamingos (Phoenicopterus roseus) and white pelicans (Pelecanus onocrotalus), while 11 aquatic bird species found in the region are at risk of extinction. The southern islands also provide habitats for two endangered mammals: the Iranian fallow bear and the Armenian mouflon (Ovis orientalis gmelini). 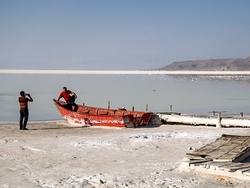 The core and buffer zones of the Lake Oromeeh Biosphere Reserve are un inhabited, but the transition zone hosts more than 36 cities with a population of over 2 million people. The ethnic origin of over 70 percent of the population is Turk, while 7 percent are Kurds and the remainder belong to various other groups. People in the area engage in agriculture, horticulture, animal husbandry, handicrafts, apiculture, mining and industry. Extraction of salt by traditional techniques and ecotourism are the main economic activities within the reserve.