Located in the central part of the Karatau ridgeway, which is a branch of Northwestern parts of Tien Shan, one of the world’s largest mountain ranges. With a total surface area of 151,800 ha, the reserve has a population of 83,000 inhabitants. This is an extremely important natural complex for the conservation of West Tien Shan biodiversity. By the number of its endemic species, Karatau occupies first place among Central Asian regions. The region’s economy is mostly based on cattle rearing, agriculture, ecotourism and recreational tourism. 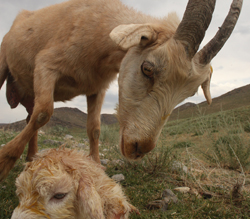 The Karatau Biosphere Reserve is located in the central part of the Karatau ridge, which is a branch of Northwestern parts of Tien Shan on the territory of South Kazakhstan region. The Biosphere Reserve includes mountain arid and sub-arid ecosystems of the middle mountains of Western Tien Shan lim. It is characterized by flat tops and steep deep canyons of temporary and permanent waterways, where rich tree-shrub and petrophyte vegetation with many relict and endemic elements is concentrated.

Its flora comprises a high presence of endemic species and subspecies, consisting of 9% of the total number. It is due to the Biosphere Reserve’s relative isolation from other Tien Shan mountain systems by going deeply into the plain areas of the desert zone at the water divide of Chu, Syrdarya and Talas rivers. One of the region’s most characteristic species is the Karatau Goat (Ovis ammon nigrimontana).

The population is concentrated in the Northern foothills of Karatau ridge and valleys of the river systems. In Suzak region almost all industrial production is mining. There are Steppe and Central mining departments for the production of uranium (in situ leaching), scandium and other rare earth elements. Agricultural production is also developed, as well as cattle breeding.