This biosphere reserve is on the southern slopes of the Minshan Mountains which is within the transition area between the Sichuan Basin and the Qinghai-Tibet plateau, with rich biodiversity. The altitude ranges from about 2,000 to 4,700 meters above sea level. The natural landscape includes snow-capped peaks, numerous waterfalls, forests, mountain streams and lakes. Lakes, waterfalls, calcsinter beach flow- Karst landform of Jiuzhaigou is rare in the world. People who live here are mainly Tibetan, Han and Qiang. Tourism is the main industry in the area. 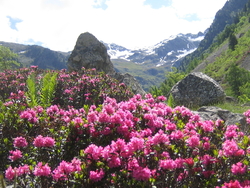 Located in southeast of Qinghai-Tibetan Plateau, Jiuzhaigou is the transition zone linking two major geomorphology units of Tibetan Plateau and Sichuan Basin where the former descends sharply into the latter. With the terrain high in the south and low in the north, it is the front turning of China’s largest step topography featuring with towering peaks towering and deep-cutting valleys. Jiuzhaigou's waterscape is endowed with the greatest value for sightseeing among all the landscapes. The large number of lakes varying in size and shape, waterfalls and hydraulic drops in different height and width, brooks and rivers over the ground, and underground rivers connect lakes, waterfalls and hydraulic drops to form a complete water system. The aesthetic value of exuberant waterscape is rare in the world. 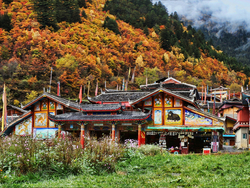 The inhabitants (about 2,000 in the reserve) are mainly Tibetan, Han and Qiang, who live in three villages located in the valley. They are mainly supported by tourism and service industry. Before 1960s, Tibetans in the valley were semi-farming and semi-pasturing. Tourism is currently conducted as the pillar of the economic structure. Tibetans have created a rich material and spiritual folk culture, with unique character. The belief of worshiping nature is to respect and protect for life, which plays a significant role in protecting the ecological environment and biodiversity of Jiuzhaigou.

The rapid growth of tourism has brought income and benefits to local communities but has also created threats to the natural environment. The local authorities are addressing these, for example by controlling the construction of new buildings.