The Inlay Lake Biosphere Reserve is located in Taunggyi District, Southern Shan State. Inlay Lake is a freshwater lake and reportedly the second largest inland lake in Myanmar. The Inlay Lake wetland ecosystem is home to 267 species of birds of which 82 are wetland birds, 43 species of freshwater fish, otters and turtles. In addition, freshwater fish from the inland wetland constitute the major protein food source of the people of Inlay. The reserve hosts diverse flora and fauna species and the lake is reported to be the nesting place for the globally endangered Sarus crane (Grus antigone).

Inlay Lake is also unique for the socio-cultural aspects of the local inhabitants, who have adapted their lifestyle and livelihoods to their biophysical environment. The majority earn their income from traditional methods of hydroponic farming, fishing and shifting cultivation. Farmers from one of the dominant ethnic groups in the Inlay Lake region, the Inthas, practice floating island agriculture, locally known as ‘Yechan’, a form of hydroponic farming. 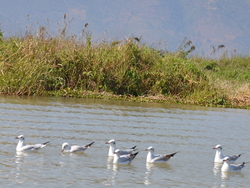 Inlay Lake is a shallow lake located 884 metres above sea level in an elongated, flat-bottomed valley bordered by parallel mountains that range up to 1,500  metres covered by hill forest. The lake was formed more than 1.5 million years ago and constitutes a remnant of a much more extensive series of lakes. These lakes formed as water dissolved limestone in the landscape, resulting in many limestone features such as caves, sinkholes, springs, spurs and intermittent streams.

While there are a total of 29 streams in the watershed flowing into the lake, Inlay Lake receives most of its run-off from four major sub-catchments containing 12 streams: Nanlet, Negya , Kalaw and Balu. The area consists of a network of freshwater wetlands and rivers including 527 species of medicinal plants, 11 species of bamboo, 184 species of orchids and 1,320 species of Angiosperms (Dicot). 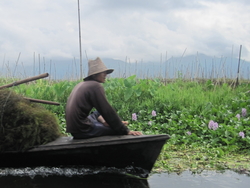 Inlay Lake lies in Nyaung Shwe township, which covers 36 village tracts comprising 446 villages, including the town of Nyaung Shwe. Approximately 172,000 people live in the 36 villages. The dominant ethnic groups settled in the Inlay Lake region are Inthas, Shans, Pa-O and Da-Nu. The majority earn income from traditional methods of hydroponic farming, fishing and shifting cultivation. Intha farmers practise one of the most famous types of agriculture in the world, floating island agriculture, locally known as “Yechan", a form of hydroponic farming.

Many pagodas and stupas have been built on or near the lake. The Phaung Taw Oo and Ah Lo Taw Pauk pagodas date back 800 years and are very culturally and spiritually significant. The forms of many pagodas in Indein village areas are similar to those of the Bagan period. Stone inscriptions at Shwe Indainn pagoda and Than daung pagoda (1785 AD) indicate links to Bagan cultural heritage and style.