Indawgyi Lake is the largest freshwater lake in Myanmar. With a total surface area of 133,715 ha, the site consists of a large open lake area, floating vegetation areas, swamp forest and seasonally flooded grasslands. The hills surrounding the lake are covered by subtropical moist broadleaf forests that harbour a number of threatened forest birds and mammals, including primates. The local population derives most of its income from farmlands bordering the lake. 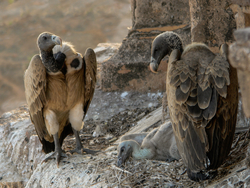 The Indawgyi Biosphere Reserve comprises the Indawgyi lake (12,000 ha), Southeast Asia’s third largest lake with surrounding wetlands and a largely intact watershed. The watershed is covered with subtropical moist broadleaf forests. Forests and wetlands of the Indawgyi lake region provide habitat for endemic and globally threatened birds, fish, turtles, primates and other mammals. The area was designated as Important Bird Area in 2004 and listed as Key Biodiversity Area in the National Biodiversity Strategy and Action Plan due to its importance for bird and mammal conservation (Republic of the Union of Myanmar 2011). Due to its global biodiversity values, especially for its outstanding values for migratory birds it has been nominated as RAMSAR site (MLECAF 2015) and included in Myanmar’s tententive list for World Heritage Sites.

More than 160 bird species have been recorded for the Indawgyi area, including many globally threatened species, including Slender-billed Vulture (Gyps tenuirostris) and White-rumped Vulture (Gyps bengalensis). The Biosphere Reserve also holds important habitats for ungulates such as seasonally flooded grassland which is critical for the endangered Hog deer (Axis porcinus). The surrounding forests of the watershed are important habitat for globally threatened primates, in particular Eastern Hoolock Gibbon (Hoolock leuconedys) and Shortridge langur (Trachopithecus shortridgei). 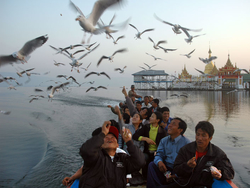 As a wetland, the area has been intensively used for generation, primarily for fishing. Grazing and agriculture have shaped the surrounding landscape. Nevertheless, Indawgyi Lake and its associated wetlands and watershed remain one of Southeast Asia’s most intact landscapes. Indawgyi Biosphere Reserve is home to the Kachin and Red Shan ethnic groups holding unique cultures and traditions. Both cultures are intimately connected to Indawgyi’s biodiversity and natural resources. This is reflected in traditional housing, land use techniques, traditional knowledge and important religious sites such as Buddhist pagodas and Christian churches located around the lake.

As a pilgrimage site of national importance Indawgyi Biosphere Reserve has the potential to become an important learning center for biodiversity conservation and sustainable development in Myanmar.