Huanglong Biosphere Reserve is situated in a mountainous area with peaks reaching up to 5,588 meters above sea level. The area has already been noted for its biodiversity hotspot, part of it being inscribed as a Natural World Heritage site in 1992. Major wild animals include the Giant Panda (Ailuropoda melanoleuca), Rhinopithecus roxellana and the leopard (Panthera pardus fusca). It is also remarkable from a scenic point of view since the biosphere reserve includes a system of 3,400 travertine pools that are linked by travertine shoals, rapids and waterfalls. Worship for the natural world among the local community, in particular in Tibetan, has played an essential role for the protection of ecological environment and biodiversity in the Reserve and surrounding areas. 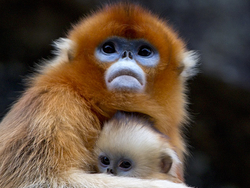 The reserve is located in transition zone of the steep slope between two geomorphologic units, namely Qinghai-Tibet Plateau and Sichuan Basin. Its eastern terrain tilts from northwest towards southeast, while its western part from east to west. The reserve is in the watershed between Minjiang River and Fujiang River, with fragmentary terrain as well as substantial ups and downs. The maximum elevation altitude reaches 5,588m (Xuebaoding Peak), and the minimum elevation altitude 1700m (the Pass of Xigou Valley). The topography is featured by considerable mountain peaks and deep canyons, which are roughly divided into: Hongxingyan Rock Glacial Mountain Plot, Huanglong Rock Mountainous Plot of Karst Water Erosion, and Xuebaoding Peak Glacial Mountainous Plot.

The biosphere reserve is known for its unique karst landscape and abundant natural resources. Vegetation coverage has reached 89.9% in the reserve. There are a total of 91 families, 241 genera, and 520 species of advanced plants in the Biosphere Reserve. Giant panda, golden monkey, Taxus chinensis and other national important protected wildlife have received effective protection with ecosystem keeping stable during the last ten years. 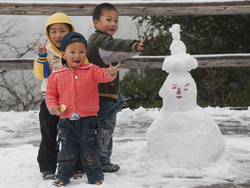 Most residents are living in the transition zone, with a total of 13 administrative villages. Eco-tourism is the pillar of their main economy. The dominant residents in the buffer zone of the reserve are Tibetans, who are mostly engaged in farming and animal husbandry. Other ethnic groups include Qiang, Hui and Han. They have lived together since ancient times, with the creation of profuse material and spiritual culture as well as unique folk culture. Xuebaoding Peak is treasured as a Sacred Mountain. Worship for the natural world among the local community, in particular in Tibetan, has played an essential role for the protection of ecological environment and biodiversity in Huanglong Biosphere Reserve and surrounding areas. What’s more, the establishment of community co-management system has elevated community residents’ support to the reserve and stimulated their enthusiasm to consciously protect wildlife.