The Hara biosphere reserve is located in the Mehran River delta in the south of Iran. It is situated near the Straits of Khuran between Queshm Island and the Persian Gulf. The reserve is a key biodiversity site as a result of its Avicennia mangrove ecosystem. 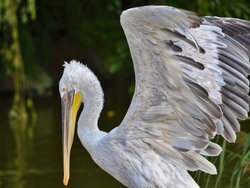 The core area of the reserve is a marine zone. The major topographic features of the region include a wetland with a series of small islands (mud hills), mangrove forests, tidal marshes and shallow coves. The reserve also hosts the largest Avicennia mangrove ecosystem along the Persian Gulf shoreline.

Sea snakes take advantage of Hara aqueous habitats for feeding, breeding and subsistence. A species of Xerophilous snake (Echiscarinatu) in the region is found on the northern coast of the region, and the critically endangered Hawksbill sea turtle (Eretmochelys imbricata) is found in the coastal waters of the reserve.

The Strait of Khuran, in which the reserve is located, is a Ramsar site, which provides a habitat for the pelican (pelecanus crispus) during the winter months and acts as a regular feeding place for the green turtle (Chelonia mydas) – both globally threatened species.

The area includes 40 villages, 13 of which are located on the southern border of the reserve while the others are found to the north. The local population are engaged mainly in trading, although. other activities include palm plantations, animal husbandry, fishing activities and ship construction. The lack of freshwater supply and salty water intrusions prevent agricultural activities close to the shoreline. Other problems that face the biosphere reserve include the development plan for Queshm Island, logging activities for fuel wood by locals in the mangrove forest, overgrazing, and illegal hunting and fishing.

The village of Laft is one of the oldest in the reserve and is closely linked to the history of Qeshm Island. Historic monuments include Naderi castle, the Old Dock, and traditional architecture, all of which reflect the antiquity of the village.