Located in the southeast of Iran, the Hamoun Biosphere Reserve includes both terrestrial and wetland ecosystems encompassing a total of seven habitat types, including desert and semi-desert areas, as well as Hamoun Lake, with its marshlands and watersheds. The three wetlands of the biosphere reserve are the most important in the region. The area is also a hotspot for migratory birds (183 species) and home to 30 mammal species and 55 plant species.

The cultural value of the site is heightened by the presence of important historical monuments and ancient temples such as Mount Kooh Khajeh and Shahr-e-Soukhteh. 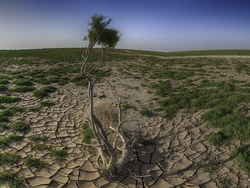 The natural borders of the biosphere reserve in the south are Mount Malek Siah and the Ridge of Mount Malek Siah, which form the joint border between Afghanistan, Iran and Pakistan. Mount Chehel-dokhtaran and Mount Palang Kooh constitute the natural limits of the western part of the reserve at altitudes ranging from 1,500 m to 2,000 m.

The reserve is located in the heart of the desert and semi-desert areas of Afghanistan and Iran. Lake Hamoun – a freshwater lake – encompasses marshlands, the watersheds of rivers, canebrakes, algae, insects and several fish species, especially during high-water periods. The reserve is also a hotspot for hundreds of migratory birds, especially wader and water species in eastern Iran. The area is of substantial ecological value due to the important role it plays in protecting landscapes, ecosystems, species and the genetic resources of the region.

Lake Hamoun is the biggest freshwater lake located on Iran’s plateau and is internationally registered under the Ramsar Wetland Convention. 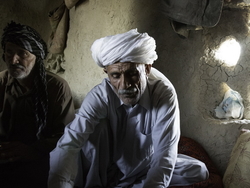 Approximately 380,000 people live in the Hamoun Biosphere Reserve. The majority belong to the Sistani group, but Baluchi and Qaeni also live in the area in addition to several nomadic tribes. Fishery, agriculture, handicrafts and straw weaving are the main economic activities.

The area is also known for several sites of historical importance including remnants of Shahr-e-Soukteh, Dahan-e-Gholaman hill and Mount Kooh Khajeh. These hills were important centres of civilization in the Bronze Age.