Central part of the Gwangneung Forest is the basin divided into east and west by the Bongseonsacheon stream (100m above sea level), which flows southward. The basin is open to the north and the other aspects are surrounded by the peaks and ridges of mountain. Owing to the geographical feature, the air temperature of this area in winter is lower by about 4 than its vicinities.

In the eastern part of the forest, Mt. Jugyeop, the highest peak (600m) in the forest, is connected by gentle ridge line to Mt. Unak and Gwangneung royal tomb, which is situated at the southern end of the ridge line. 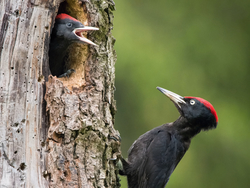 The western part of the forest is composed of Mt. Soribong (537 m), the second highest peak in the forest, and its three tributary ridgelines to the north, south, and east.

Particularly the eastern ridgeline forms a gentle declination that disappears into the Bongseonsacheon Stream, and the site formed on the environs of the eastern ridge, the central part of Gwangneung Forest, has a fertile soil. And it is covered withold-growth forest composed of deciduous broadleaf trees assumed to be climatic climax tree species of this region.

Thirty-five villages with approximately 230,000 inhabitants are within the transition area of the proposed Biosphere Reserve. The inhabitants can be categorized into two groups.

Recently, however, new occupations have been introduced, specifically, businesses that provide nature exposure to urban residents,such as hiking trails or forest retreats and weekend farms.

The core areas are protected forests for scientific researchand monitoring of natural deciduous broad-leaved forestand habitat protection area for the white-bellied woodpecker. The buffer zones are experimental forest for development of forestry technique and education. Most of theforests are plantations. The transition areas consist of private forests, farmlands and residential districts.