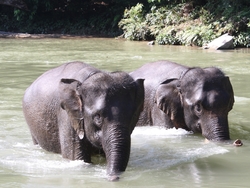 Gunung Leuser NP is proven as a rich yet vulnerable natural laboratory. Mac- Kinnon and MacKinnon (1986) stated that Gunung Leuser has the highest score for its conservation contribution to Indo Malaya conservation area.

Leuser is a habitat for most fauna, ranging from mammals, birds, reptiles, amphibians to fish and invertebrates. It is a region which has the longest list of birds in the world, up to 380 species with 350 of them found in this Park.

Gunung Leuser is also home to 36 of 50 Sundaland endemic bird species. Almost 65% of 129 species of mammals in Sumatra is recorded in this area. Gunung Leuser ecosystem is a habitat for key fauna such as Sumatra elephant (Elephas maximus sumatranus), tiger (Panthera tigris sumatrae), rhinoceros (Dicerorhinus sumatrensis) and orang-utan (Pongo abelii).

The Park is also habitat to owa (Hylobates lar) and kedih (Presbytis thomasi). There are also more than 4,000 plant species found in the Park, including 3 of 15 parasite Rafflesia. Thus, it is a habitat of many medical plants (Brimacombe and Elliot, 1996). As a natural laboratory, Gunung Leuser is impor-tant for conservation, education, scientific research for local and foreign researchers and ecotourism. Orangutan Research Station in Ketambe, Southeast Aceh District, is one of the oldest research stations, opened by Dr. Herman D. Rijksen, and is still an interesting location for researchers. 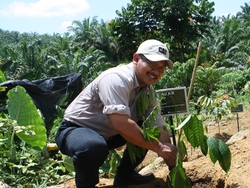 More than four million people live within or adjacent to the Gunung Leuser National Park, with many different ethnic groups represented.

Most of them are farmers and depend very much on the protection of this park for their subsistence. Paddy fields, mixed gardens, and small-scale and medium estates of rubber and oil-palm receive a consistent water supply from this park.