The Gulf of Mannar endowed with three distinct Coastal ecosystems namely coral reef, seagrass bed and mangroves is  considered one of the world’s richest region from a marine biodiversity perspective, is known for its unique biological wealth and is a store house of marine diversity of global significance. The Gulf’s 4,223 species of plants and animals representing from primitive to higher forms make it one of the richest coastal regions in India. Most of the islands have luxuriant growth of mangroves on their shorelines and swampy regions. The sea bottom of the inshore area around the islands are carpeted with seagrass beds which serve as ideal feeding ground for Dugong dugon, the endangered herbivorous marine mammal.

Highly productive fringing and patch coral reefs surround the islands and are often referred to as underwater tropical rainforest and treasure house for marine biodiversity, in particular marine ornamental fishes. Occurrence of these specialized ecosystems makes Gulf of Mannar an unique large marine ecosystem in the Indian subcontinent. 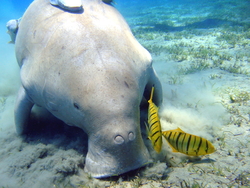 The islands have irregular outlines, with splits and partially enclosed bays and often higher sandy beach ridges enclosing areas of mudflats and standing water with the bay. They are made up of sand structures with gravel and coral boulders.

Seagrass beds serve as nursery and spawning grounds for diverse biota and habitat for macro and micro algae as epiphytes. This habitat is the feeding grounds for the largest endangered marine mammal Dugong i.e., Dugong dugon and, also, sea turtles. This area is also the last refuge of an invertebrate, the unique ‘living fossil’ Balanoglossus that links vertebrates and invertebrates. It is also important for crustaceans, molluscs, echinoderms, fishes, turtles and many other mammals. 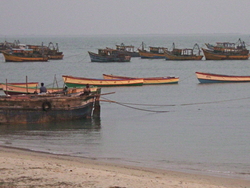 The inhabitants are mainly Marakeyars, local people principally engaged in fisheries. There are about 47 villages along the coastal part of the biosphere reserve. The Global Environmental Facility (GEF) has provided support to the establishment of the biosphere reserve, including the setting up and functioning of the Gulf of Mannar Biosphere Reserve Trust, which is responsible for the coordination of the management plan for the biosphere reserve in concertation with government agencies, private entrepreneurs, and local people’s representatives. Priority is being given to encouraging community-based management.

The Gulf of Mannar Biosphere Reserve occupies a prominent place in the cultural heritage and history of India. The famous pilgrim centre, Rameswaram, which finds place in the epic Ramayana (one of the great epics of India) is situated in the gulf on the island of Pamban. The region receives about 1.4 million pilgrims on a yearly basis.