The Fuvahmulah Biosphere reserve is located in southern Maldives. The biosphere reserve is approximately 1300 hectares and is the country's only single island administrative atoll. This atoll boasts the most diverse coral ecosystems in the country with its healthy habitats and unique coral sand beach formations. This atoll is unique due to its single island and its bowl form. 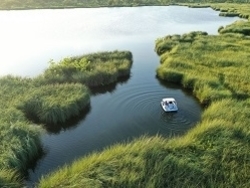 The Fuvahmulah Biosphere reserve in souther Maldives is known for its incredibly diverse coral ecosystems. The atoll encompasses a variety of biodiversity within its coral, mangrove, and wetlands (also known as Khili) systems. The reef systems are home to significant populations of sharks mainly tiger, thresher, and whale sharks. However, it is the diversity of fish that is immensely significant with over 1,200 species found within this atoll. The Fuvahmulah biosphere reserve plays an important role for migratory birds with over 167 species found and five of which are endemic.

Fuvahmulah has hard underlying bedrock on its outer rim areas, composed primarily of hardened coral and sand conglomerates. The geology of Fuvahmulah shows that the surface of the island is in the form of a very shallow bowl with two water bodies known locally as ‘kilhis’ at medial low points, making up two small linked sub-catchments. These two water bodies,1) Bandara Kilhi, and 2) Dhandi Magu Kilhi are surrounded by marshes, covered by thick layers of peat and mud. Coconut palms, trees and shrubs grow around the marshes. The marshes are covered by Cladium sp and an unknown species of fern that is suspected to be an exotic invasive species brought to the island sometime in the 20th century.

Due to the absence of a lagoon between the outer reef edge and the island beaches, the island topography is affected by strong wave action from all sides. These unusual oceanic conditions have resulted in the famous “Thoondu”, an area of fringing reef that extends from the northern point of the island and the pebble beach with unique shiny small pebbles that are not seen in any other place in Maldives. 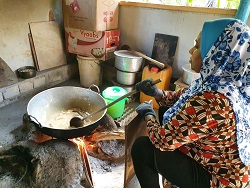 The people of Fuvahmulah value their socio-cultural individuality and maintain a life in harmony with nature. The communities within this biosphere reserve are environmentally conscious and promote sustainable development. Many of the species found in the marshes are used by the Fuvahmulah community for traditional medicine or other uses.

The Maldivian atolls are at risk by rising sea levels due to climate change as well as an increasing number of invasive alien species such as the lotus which has invaded many Khili systems.